Posted on March 5, 2013 by raisingmyrainbow 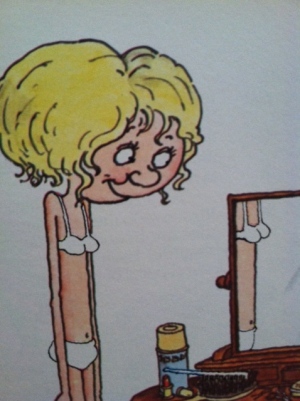 From the “What’s Happening To Me” book that my mom gave to me and my brother.

I was in fifth grade.  I boarded the school bus and a sixth grade girl asked me if I was virgin.

“No,” I said giving her a dirty look and finding a seat.  That sounded like a terrible thing to be.

“Yes you are.  Virgin!” she said rudely.

I ignored her.  After dinner I told my mom that a girl at school called me a virgin.  She took a deep breath.

“Well, honey, you are one.”  And, right then and there, I got the sex talk.  I walked to my bed with slumped shoulders and cried myself to sleep.  Men’s penises get hard and they stick them in women’s vaginas.  Someday a man was going to stick his penis in my vagina.  What a nightmare.

The next day my mom left a book about puberty and sex on my bed.  I was grossed out and humiliated.

Our oldest son is getting ready to turn 10.  He’s been asking some questions that have us feeling like the first of many puberty and sex talks may be coming in the year ahead.  Which got me thinking. 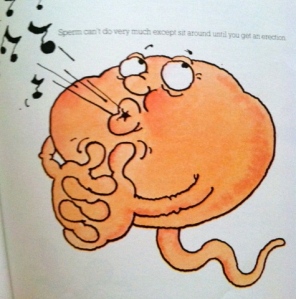 One big, fat sperm chilling out…waiting for an erection.

I can’t remember the first time that I assumed it because I’ve assumed it for so many years now.  I’ve always assumed that, because we have two boys, my husband would take on the brunt of the responsibility when it comes to detailed discussions of puberty and sex.  We’d be absolutely open and honest about puberty and sex discuss them freely as needed, but certain discussions are heavy – C.J.’s Dad would lift those.  If we had had girls, it would have been my job.

“Who gives the boys the sex talk?” I asked C.J.’s Dad out of the blue – like I ask most questions.

“I do,” he said without hesitation. 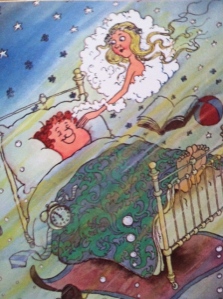 This, my friends, is what a wet dream looks like.

“So, if his brother is straight, are you going to give him both sex talks?” I asked.  “That only seems fair.”

“Ugh!  My parents didn’t even have any puberty or sex talks with me.  I figured it out on my own.  Can’t they just do that?” C.J.’s Dad asked entirely frustrated.

“No!  They need to know about safe sex and being responsible and respectful and all that crap,” I argued. 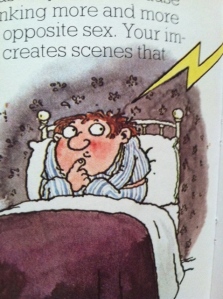 This poor lad has been caught in the act.

To be honest, if one of my son’s is gay, it just seems like I should be the one to give the sex talks.  I don’t know why.  But I think that we need to be careful with both of the boys that as we start to discuss these things we are mindful not to make assumptions about their sexuality.  No stigma.  No shame.  No secrets. But we still have to educate them about STDAware tests for chlamydia everything else more unpleasant.

Thankfully we have plenty of time to think about it.  Because, as with so many things about raising kids in general and raising a gender nonconforming child in particular, we have no idea what we are doing.

Disclaimer: I know that not all households have a father and mother present.  If I were the only parent/primary caregiver in our home, I would give the sex talk to both boys (or both girls, if we had them.  Or, to any number of children in any combination of sex/gender).  C.J.’s Dad and I realize that our assumptions hadn’t been based on a lot of thought.  We assumed them; we didn’t think about them prior to getting inspired to write this post.

RaisingMyRainbow.com is a blog about the adventures in raising a fabulous, gender creative son.
View all posts by raisingmyrainbow →
This entry was posted in Main Site Header and tagged Gay, Gender, heterosexual, homosexual, procreation, puberty, sex, sex talk. Bookmark the permalink.