Forget Construction, I Belong on the Stage

Here’s what I know about children’s museums.  They are crowded.  They are grimy.  They are germy.  They are overrun with children and uber-parents.  They are no place for a hangover.  Maybe it’s different where you live, but I doubt it.  Then, I happened upon Pretend City and actually enjoyed myself (except for the part where I saw a one-year-old wearing jeans more expensive than any pair I own.  True Religions in size 18 months?  Really?)

C.J. and I entered Pretend City and were overwhelmed, so we retreated to the less-crowded Construction Site to gather ourselves.  C.J. eyed a pink hard hat and suddenly had an affinity for carpentry.  He awkwardly picked up some tools and started, um, constructing.  When a little girl entered the Construction Site a student volunteer approached C.J., took off the pink hard hat and put a yellow one in its place.  “Hey Buddy, you probably want the yellow hat anyway,” she said as she walked the pink hard hat to the little girl.  I waited to see how C.J. would handle the situation.  He followed the student helper and said, “No, I want the pink one!”  She looked at me and I nodded.   She swapped the hats again and I was proud that C.J. didn’t have a meltdown, but handled the situation and stood up for himself.  That’s my boy, wearing a pink hard hat and wondering what to do with a hammer.

We spent most of our time, by far, at the Amphitheater, which is a stage complete with costumes and instruments; a soundboard that operates lights and music; and rows and rows of seating for a captive audience.  C.J. found his home in Pretend City. 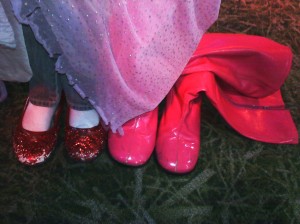 So many costumes, so little time.  Seriously. A silver flapper dress?  Oh, yeah, he rocked it for a while.  A pink princess gown?  It was his favorite.  Now, for the shoes.  Pink go-go boots?  They were fabulous, but zipped up to his crotch and were a tad bit inhibiting.  Ruby slippers?  Werk.

With his outfit assembled it was time to hit the stage.  What?  Right, an instrument.  Tambourine or maracas?  Tambourine, you know it. 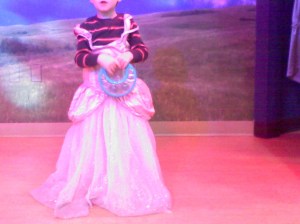 He entered stage left, ready for his solo.  What?  There were other people on the stage?  C.J. rolled his eyes and then started throwing elbows to get down to center stage, where he belongs, obviously.  I tried to explain that sometimes you have to hang back and be in the chorus.  If looks could kill.

It was a solid hour of costume changes, prop switches and Broadway-worthy performances.  From time to time he would get the stage all to himself.  Those were the happiest of times.  Every now and then an un-costumed boy would enter the stage and stare oddly at C.J.  Those were the worst of times.   And, if C.J. did happen to see a strange look cast in his direction, he would, in return, give that child a look as if to say “I’m so sorry that you’re not fabulous like me.  Really it’s a shame.”

I got looks too.  Parents smiled at the sight of C.J., up on stage, in a pink sequined princess dress with red sparkly Mary Jane’s.  Then, they searched the crowd for the adult to whom he belonged.  Some smiled with me, and I could tell that they were seeing an imaginative little boy expressing himself freely.  Others smiled at me, and I could tell they were seeing an embarrassment of a child who would, no doubt, have issues as an adult due to my horrible parenting skills.  We delight some and disturb others.  Yet another thing I learned at a children’s museum.

8 Responses to Forget Construction, I Belong on the Stage