Posted on December 21, 2011 by raisingmyrainbow

Last Christmas C.J. was beyond ready for Santa.  He had memorized the name of the specific doll that he wanted and was eager to let the big man know just what was expected of him on Christmas morning.  C.J. was nearly four and there was very little stage fright.

Look at those lashes and pretty pink lips!

“I want to see Mrs. Claus and sit on HER lap and tell HER what I want,” C.J. insisted.

Great.  Where was I going to find a place where C.J. could sit on Mrs. Claus’s lap?

“There’s Mrs. Claus,” I said pointing to Santa’s photographer who just might have been too big for the customary elf costume and was, therefore, relegated to the role of Mrs. Claus;  which is the role I would have wanted anyway because, one would assume, that it comes with a little more respect and right to authority.  But, really, what do I know about the inner workings of the Mall Claus-to-elf employment org chart.

“They must be parked out by Nordstrom Rack,” I mumbled, as we cut through J.C. Penny’s to get to our car.

A few days later, our family of four was at Knott’s Berry Farm.  Bless their berry souls for letting police and fire families in free between Thanksgiving and Jan. 31.  My intention was to get the boys’ picture taken with Santa at Knott’s.  When my oldest son was younger — before C.J. made his grand entrance with a flourish into our lives — I considered myself a connoisseur of Santas and, so, I know that Santa at Knott’s is as close to the real deal as you’re going to get.

We walked into his workshop, which was filled with toy souvenirs to buy, and C.J. quickly realized what was going on.  He began to wring his hands, which is what he always does when he is getting nervous and unsure.  But, he also knew that if he was going to tell Mr. Claus what he wanted for Christmas, now was the time.  The countdown to the 25th was in full swing, he knew this because most of the chocolates were gone from his advent calendar. 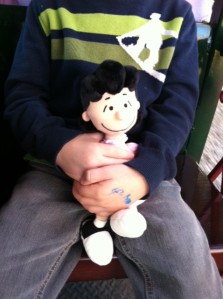 C.J.'s souvenir from Knott's. He's got a thing for Lucy lately,

C.J.’s Brother hopped right into Santa’s sleigh to shoot the shit for a while.  His legs were outstretched and crossed at the ankles; he had one arm up on the side of the sleigh and was chatting up Santa about Bey Blades, video games and Percy Jackson.  C.J. would not enter the sleigh.  So he sat on the steps to the sleigh.  He wouldn’t look at Santa.  Santa leaned across the sleigh, across C.J.’s Brother and tapped C.J.’s shoulder.

“What do you want for Christmas little boy?,” he said jollily.

“Mama, what do I want for Christmas?,” C.J. looked at me helplessly.  He froze.  Like I would if I came face to face Tina Fey or a grizzly bear.

“How about anything Disney Princess?,” I offered.  Funny, at that point I was more concerned with helping my son capitalize on his big moment than what Santa would think about my boy wanting a girl toy.  Things have really changed in a year.

“Yeah, ANYTHING Disney Princess,” C.J. said with a big smile.

“Alright!,” Santa said assuredly as he gave C.J. a high five.  The flash snapped and we walked away.

C.J. wasn’t specific with Santa, but he sure was with me.  In the form of a list that is two pages long.  Single spaced.  His brother’s list took up a mere half a page.

On his last day of school before Winter Break, C.J. took part in his pre-K class’s Holiday Recital.  He was so excited because all of the kids – boy and girls — got to be angels and wear white dresses/gowns that they made themselves from white pillowcases.

I talked to Ms. Sensible after the performance and let her know how happy C.J. was because all of the kids dressed the same and got to wear dresses.

“You don’t think that that as a well thought out decision this year?,” she asked with a wink. I hope Santa is good to Ms. Sensible this Christmas.  And, I hope he’s good to all of you, because you’ve been amazing to us this year.

I’m planning on taking a blogging-vacay from here until 2012.  I’ll see you when I return, right?   Cheers!

RaisingMyRainbow.com is a blog about the adventures in raising a fabulous, gender creative son.
View all posts by raisingmyrainbow →
This entry was posted in All Posts, Main Site Header. Bookmark the permalink.