My Son Has A New Hero

Posted on December 6, 2013 by raisingmyrainbow

My son has a new hero.  His name is Chad Alan.

C.J.’s Chad Alan is a designer, artist, YouTuber and the founder of a movement called B.O.L.D. – which stands for Boys Openly Liking Dolls.  Through B.O.L.D. and his YouTube channel, Chad encourages gender nonconforming kids to be bold, be themselves, stand up for what they believe in and bravely like what they want to like.

C.J. found Chad while we were searching YouTube for Monster High content (after he got tired of watching cake decorating videos, which I found made me the dangerous combination of bored and hungry).  He hasn’t left Chad’s channel in more than two weeks.

Chad makes amazing beds and things for the Monster High Ghouls and other dolls.  His videos and tutorials also feature pop music. – which C.J. sometimes dances around to in his room paying no attention to the video’s content.  Chad and C.J. may be kindred spirits; Chad just doesn’t know it yet.  When recently asked what he wants to be when he grows up, C.J. replied “Chad Alan.”

Well, one day last week while I was at work, C.J. and his dad followed Chad’s tutorial for making a stone bed for Rochelle Goyle.

When I got home from work, I was reminded – yet again – that Matt is an amazing father and husband.  How many men would spend hours making a bed for their son’s doll?  I mean, it even required a trip to the craft and fabric store.

With the fabric that Matt and C.J. purchased (based on Chad’s tutorial), I spent that evening and the following day sewing with C.J.  We made the blanket and four pillows.  C.J.’s favorite part of sewing is pushing the foot pedal.  He especially likes it when I tell him to go slow and he pushes the pedal hard to make it go fast and then he says, “whoops, my foot slipped” with an impish grin. 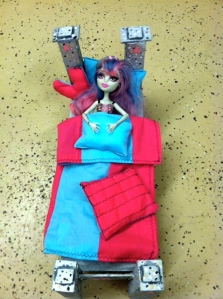 C.J. has been having a rough few weeks at school because he is different and because he likes “girl things.”  Chad Alan and his YouTube channel make C.J. feel like he fits in.  Chad makes it cool to be B.O.L.D.  And, that makes Chad pretty cool in my son’s eyes and mine.  Matt thinks he’s pretty cool too, but wishes that he didn’t post a new bed tutorial almost daily.  How are we supposed to keep up with that?

RaisingMyRainbow.com is a blog about the adventures in raising a fabulous, gender creative son.
View all posts by raisingmyrainbow →
This entry was posted in All Posts and tagged B.O.L.D., Chad Alan, gender creative, gender nonconforming, Gender Stereotypes, Mattel, Monster High, Rochelle Goyle, YouTube. Bookmark the permalink.

30 Responses to My Son Has A New Hero