This Is How A Father Should Love

In between all of life’s milestones and years, we slowly made our life, wrote our story. We learned everything about each other. Then we learned some more. Just when we think there’s nothing left to learn, we prove ourselves wrong again.

I’ve learned that Matt was born to be a husband and father. It’s what he’s best at. And, he’s good at a lot of things. His love for Chase, C.J. and me has always been loyal, forgiving, unconditional and fierce. I’ve never met anyone who can love like Matt can.

When our youngest son started playing with dolls, wearing dresses and acting effeminate, I foolishly wondered if Matt’s love would be less for him that it was for us. Now, four years after our son picked up his first Barbie and refused to put her down, I’ve learned that C.J.’s gender nonconformity has made Matt an even better husband, father and person.

Last year at Orange County Pride, we each picked up some of those iconic Human Rights Campaign stickers — the yellow equal sign in the blue square. I used mine as a bookmark. Without saying a word and while no one was looking, Matt put his proudly on his truck’s bumper. When I saw it, my heart melted, my eyes watered and I took a picture to save on my phone forever.

“What did the guys at work say about your HRC sticker?” I asked him later. I imagined him driving his massive, lifted truck into the police department lot and possibly getting some stares or slurs. I worried that he took a stance when he didn’t really need to.

“Nobody said anything and I don’t care if they do,” he said, matter-of-factly.

We took Chase and C.J. to Disneyland on Easter Sunday. We only had 30 minutes to spare before our dinner reservations. We were trying to cut quickly across the park to ride the Matterhorn Bobsleds. We were stopped in our tracks by Mickey’s Soundsational Parade. We had to go right or go left. We had to hurry. Chase was impatient. Matt saw Ariel atop a float, headed down Main Street straight for us. He whisked C.J. up, onto his shoulders.

“You take Chase and ride The Matterhorn. I’m staying right here with C.J. so he can see the princesses. We’ll meet you at dinner,” he said.

“No. Go,” Matt said, looking at the approaching princesses, not me. 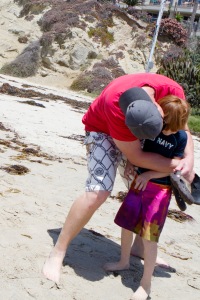 Later he told me that C.J. screamed uncontrollably and clapped wildly as the princesses came into his view. He waved to the princesses and lost his words in the thrill of the moment. He was overcome with happiness, and so was Matt.

“You should have seen him. He was out of his mind when he saw them. I don’t think I’ve ever seen him like that. And, I’m glad it was me who was with him. Just me and him,” Matt said over dinner when the kids weren’t paying attention.

Initially, I felt a tinge of jealousy because I hadn’t been there to witness C.J.’s unbridled reaction. The jealously faded quickly. I’m glad they shared that moment, forever in their minds. A father and son and the Disney Princesses.

The four of us like to watch Modern Family together. We sat down to watch Mitch and Cam’s wedding. As they were saying their “I Dos,” I remembered something irrelevant and unimportant that I wanted to tell Matt. As I turned my head to him, he turned his head to me and asked, “Why is this making me emotional?” We watched the rest of the episode in happy, sweet silence.

Matt has learned that love is love. Between a father and his effeminate son. Between same sex partners.   Between people.

The HRC sticker on his bumper, his steadfastness in the presence of princesses, his emotions when watching two men marry, these are the little moments when I look at my husband — my hyper-masculine, jock, cop, tough-guy of a man — and think I could not have picked a better partner for life or father for my children.

43 Responses to This Is How A Father Should Love