Falling Off the Boy Toy Wagon Into Girl Toy Heaven

Posted on January 24, 2011 by raisingmyrainbow

It was like watching somebody come alive, watching a flower bloom, watching a rainbow cross the sky.

It was the day C.J. discovered Barbie.

Back story: Uncle Uncle and I had a bad Barbie addiction as children. It was tough to shake, especially since our mother was and is a total enabler.  In March 2009, Nana Grab Bags bought me – a grown woman — Mattel’s 50th Anniversary Bathing Suit Barbie.  She was a modernized version of the original 1959 doll with a two-piece, black and white bikini trimmed with her signature color pink, pink hoop earrings, ponytail and a cell phone. 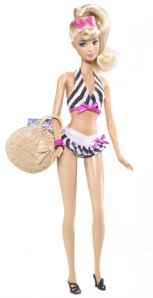 I kept her in her box in my closet for months.  One fall day I was cleaning out my closet and sat boxed Barbie on my bed.

I nearly fell off my stepstool at C.J.’s shriek.

I hesitated.  You don’t open a boxed Barbie if you can at all help it.

But his face.  His sweet excited face could convince me to do worse things.  We opened her.

Cue the choir of angels.

I figured he would play with her for a day or two and lose interest; like he did with most toys.  She’s been a constant in his life for more than a year.  Oh, he wasn’t dabbling, he was hardcore from the start.

It was the beginning of our adventures in raising a slightly effeminate, possibly gay, totally fabulous son. 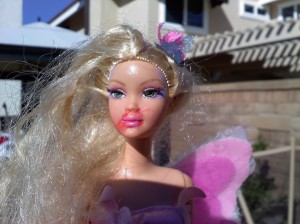 Hair and makeup by C.J. Call for your appointment today!

C.J.’s Brother was a devoted Thomas the Tank Engine fan from his third birthday to his fourth birthday exactly.  12 months; no more, no less.

C.J. and Barbie are celebrating their 16 month anniversary.

“And, how’s C.J.?  Is he still playing with dolls?  Oh, he is?  When do you think this phase is going to end?  What do you think it means?” ask Grandma and Grandpa Colorado when we catch up by phone.

Since C.J. hooked up with Barbie I’ve been mostly answer-less.

I have to admit, it’s easier for me to connect with my younger son over Barbie than it was to connect with my older son over Thomas the Tank Engine and the Best Traxxas RC Trucks.  Me and Babs go way back.  Playing Barbies with C.J. is much like playing Barbies with Uncle Uncle.  Uncle Uncle would backcomb her hair to high hell and I’d be responsible for brushing her out; same goes for when C.J. manages to tangle her to rat’s nest proportions.  And, both Uncle Uncle and C.J. have scolded me countless times for my outfit choices and styling techniques.  It’s history repeating itself. 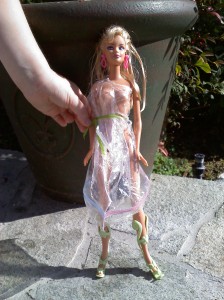 Uncle Uncle taught C.J. to fashion a waterproof cocktail dress out of a Ziploc bag. Perfect for nights in the hot tub or a dip in the rooftop pool at The London after dark.

C.J. has been his happiest since he met Barbie, we haven’t always been.  But, as a mother, I wouldn’t have it any other way.