Posted on October 17, 2011 by raisingmyrainbow

“Ohhhh, Mama, I look like a soccer player!” C.J. is standing in front of my mirrored closet twisting back and forth at the waist, watching his shimmery black athletic shorts — which are two sizes too big — sway below the knees as he moves.

“That’s because you are a soccer player,” I say with excitement. 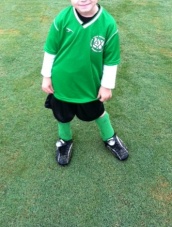 “Why is my costume green? I don’t like green. I like pink. And, purple,” C.J. asks, not taking his eyes off of his reflection.

“Because you are on the Green Dragons!” I’m trying to exude total excitement and none of the apprehension that I really feel.

Two days later we arrive at the first game, with is also the first practice when you’re on an “Under 5 (years old)” AYSO team.

C.J. meets his five teammates and his coach. They are all bouncing around like they are hopped up on Red Bull and fruit snacks. A little boy named Nolan approaches C.J., who is standing timidly by his brother.

“Give me five!” Nolan shouts.

C.J. smiles and gives him five. It’s the passive version of a high five where you lay your palm out open and let the other person do the actual “fiving.”

“Give me five!” Nolan shouts again. His energy is appreciated, but I’m glad that my kids take a while to warm up.

“Now, I’m going to give you a hard five!” Nolan shouts.

“C.J. doesn’t do ‘hard fives’,” C.J.’s Brother says in warning to Nolan, who immediately turns and runs in search of someone who does do “hard fives.”

The 30 minute practice was over before C.J. knew it and we headed to the game field. As we were walking he spied it. I saw it. I saw him see it and I knew what was coming. He pointed to the little girl in the pink AYSO uniform and said very loudly, “Why does SHE get to wear pink and I don’t?”

“Because you got picked for the green team. They don’t have a pink team for boys. And, this is one of those times when you get what you get and you don’t throw a fit.”

C.J. was pissed, confused and all-around disgruntled about the color of his uniform, but he kept walking to his field.

If you’ve seen kids this age play soccer, you know what it looks like. A cluster of kids, with the ball in the middle moving up and down the field, and sometimes off of the field, in a swarm of chaos and kicking that accomplishes next to nothing. They kick the ball in the direction of whatever goal is closest, with little regard to if it is their goal or not.

At halftime, which was a grueling 15 minutes in to the game, the kids were a sticky, sweaty mess with a coating of wet morning grass. C.J. joined his fans for a drink of water and some oranges. His shirt had come un-tucked in the frenzy of soccer action and he was twisting it around in his fist.

Just so you know, K. Stew is largely believed to have the best t-shirt knot in hollywood.

C.J.’s Dad gives me a questioning look. “Did you teach him that?”

“Then where did he learn it?”

“No, baby, we aren’t going to tie your jersey in a knot in the front,” I said.

“Can we knot it in da back?,” C.J. asked, demonstrating how it would be done.

C.J’s Dad looked at me and rolled his eyes.

“No, baby, let’s just tuck it in again.” Halftime was over, so there was no debating which would look better, a re-tuck vs. a knot in the front or back.

C.J. continued to follow the swarm of players, keeping to the perimeter, with his arms straight down and wrists at 90 degree angles. At one point the ball was kicked by another player and it bounced off of C.J.’s shin. He looked at us and smiled. Dimples deep and pride high.

“Good kick C.J.!” we all cheered from the sidelines.

On the way home C.J. regaled how that bounce off of his shins was a kick that almost scored a goal. I regaled internally how his sporty jersey was almost turned into a one-of-a-kind knotted creation sure to go against AYSO boys’ league standards.

RaisingMyRainbow.com is a blog about the adventures in raising a fabulous, gender creative son.
View all posts by raisingmyrainbow →
This entry was posted in All Posts, Main Site Header and tagged AYSO, gender creative, gender nonconforming, Orange County, parenting, Queerty, raising a gay child, Raising My Rainbow, Soccer. Bookmark the permalink.

Leave a Reply to ButchDyke(is that redundant)? Cancel reply