Posted on October 20, 2011 by raisingmyrainbow

Some of you have noticed that I went M.I.A. last week.  I was actually in Greece on “holiday” as super-fancy people here in the states call it; the rest of us call it vacation.  Either way, C.J.’s Dad and I were away for nearly two weeks.  The first week I managed to the blog.  The second week I managed to drink Devil’s Tongues on Paradise Beach in Mykonos; haggle for some “genuine replica” purses and watches at The Grand Bazaar in Turkey; and otherwise have the trip of a lifetime with our BFF’s Auntie KK and Timmy S.

I would have told you about the trip earlier, but my hubby, being the lawman that he is, didn’t want me to alert anyone to our house being vacant.  Which point I argued because our house wasn’t vacant, his parents were here watching C.J. and his brother.  Oftentimes I lose my arguments before they have begun.  Anyway, I’m back.

Thank you to those of you who emailed to check on me.  I am alive and well and jet lagged. 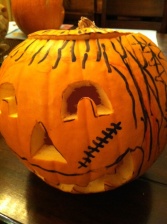 Daddy and C.J. carved a pumpkin. C.J. took his time drawing the hair one strand at a time.

More of you emailed to see if C.J. has selected a Halloween costume.  Yes, he has.  After much consideration – with particular attention given to your suggestions found here  at the end of my post – he has decided to go as Frankie Stein from Monster High.  She’s the 15-year-old daughter of Frankenstein.  Stay tuned for more to follow on our Halloween festivities and/or calamities.

News flash!  The BBC has published an article about Raising My Rainbow…in Portuguese.  Hope it says nice things.

Thanks for caring, seriously!

RaisingMyRainbow.com is a blog about the adventures in raising a fabulous, gender creative son.
View all posts by raisingmyrainbow →
This entry was posted in All Posts and tagged BBC, Frankie Stein, Greece, Monster High. Bookmark the permalink.