Posted on January 24, 2012 by raisingmyrainbow

My in-laws, Grandma and Grandpa Colorado, are a hunting, drinking, fishing, old-fashioned duo who are, thanks to C.J., newly-committed to learning about all of this sexuality and gender stuff.  Their family photo albums are filled with photos of men, all straight-as-an-arrow, doing hyper-masculine things like playing football, using tools and holding big dead fish.  My family photo albums are filled with photos of fabulous boys doing effeminate things like wearing dresses, sewing and baking cakes.  My husband’s family raises straight boys, my family raises LGBTQ boys.  Their grandson has forced them out of their comfort zone a bit and I have to say I’m quite proud of their progress.

During their last visit, Grandpa Colorado was playing with C.J.  When Grandma Colorado entered the room I heard him tell her this about Draculaura from Monster High: 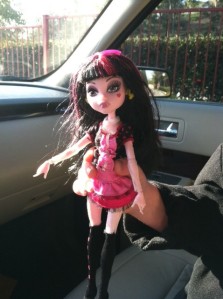 “Now that girl in the bustier, I had a hell of a time getting her top on.  She has fishnet sleeves and splayed hands.  That just doesn’t work out so well.  Somebody didn’t think that through.  And, I spent about ten minutes getting her stockings up and C.J. pulled them off in one second.  Apparently she drops trou pretty easily.  I’m not gonna lie, pulling those stocking up over her cheeks had me feeling a little weird.  I’m definitely entering new territory here.”

After they returned home to Colorado, Grandma Colorado got back to her volunteer work.  She left this message on my voicemail:

“I just delivered the backpacks for our Feed our Children program and one of my little boys named Ezra had a big Minnie Mouse bow in his hair!  I said ‘Hey Ezra, I like your bow.’  He said ‘Thank you!  Most people don’t like it.’  I said, ‘oh, no, I think it looks good!’  He said that this spring break his family is going to Disneyworld and all he wants to do is give Minnie Mouse a big hug and a kiss.  Ezra made me think of my little C.J., so I just had to call and tell you.  Love you guys.”

C.J.’s Brother thinks that LMFAO pretty much has the best jams on the radio these days.  Because of his love for the duo, there are some days when no one in our family can get LMFAO out of our heads.  Here, we catch C.J. singing in the bathtub again, LMFAO’s Party Rock Anthem.  Click on the arrow below to listen.

I recently received an email from James Parris.  He’s working on a short film project that sounds really interesting.  The film will be called “Pink & Blue” and will use whimsy to promote gender equality at playtime and power a simple idea: It’s healthy for girls and boys to share EQUAL access to imagination during their developmental years – and beyond. Learn more here: http://www.kickstarter.com/projects/1031476088/pink-and-blue

I promised Nick at Camp Aranu’tiq that I would let you all know that registration is now open for this summer.  Camp Aranu’tiq is a weeklong, overnight summer camp for transgender and gender-variant youth ages eight through 15.  It sounds like fun!  They have two locations: one in coastal Connecticut that has been operating for two summers and one in the mountains of Southern California for which 2012 will be its inaugural summer. Learn more here: http://www.camparanutiq.org/

RaisingMyRainbow.com is a blog about the adventures in raising a fabulous, gender creative son.
View all posts by raisingmyrainbow →
This entry was posted in All Posts and tagged Camp Aranu'tiq, Colorado, Draculaura, LMFAO, Monster High. Bookmark the permalink.