Dresses as a Form of Punishment

“Where are you two troublemakers off to?” C.J.’s Dad asked as C.J. and I strode between him and his beloved flat screen on our way outside to squeeze in some scooter time before sunset.

“We’re going to ride our scooters,” C.J. said over his shoulder as he continued out of the house.

C.J. had just been upstairs playing dress up while I was putting laundry away. Earlier in the day he had been wearing his “Someday They’ll Make a Movie About Me” shirt from Old Navy and swim trunks.  Now, he was wearing a pink t-shirt dress with hearts on it and a Monster High barrette in his hair.

“Honey Badger don’t care!” I said to C.J.’s Dad.  It’s what we say to each other when we really mean that somebody doesn’t give an eff about something.

“People are going to think that he’s in trouble,” C.J.’s Dad said.

“Yeah, people are going to see him dressed like a girl and that’s the first thought that will come to mind,” I said in sarcasm and continued outside to mount my scooter.  I secretly love riding a Razor scooter; it makes me feel like such an extreme athlete.

We used to prefer that C.J. not go out of the house if he was wearing an article of girls’ clothing. We’d gently steer him towards indoor play or have him put on something more appropriate for “safety reasons.” We did so to save all of us from ridicule and judgment. 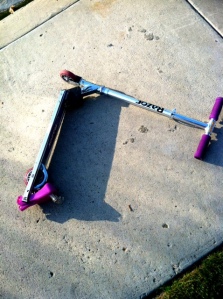 I’ve also always had this weird belief that if a sexual predator were to be roaming our streets, a little boy dressed as a little girl would tickle his fancy like no other, making our son the prime target for pedophiles.  These are the assumptions that I develop in my head that make perfect sense to me.  I assume that if a pedophile can score a seemingly confused gender nonconforming kid, they have some sort of bragging rights amongst their like-minded friends.  These, of course, are all just assumptions.  I’ve never associated with pedophiles, so I’ve never had anybody to either confirm or deny my allegations.

We’ve become more lenient, C.J. doesn’t desire to wear frilly things out of the house as much as he used to and our neighbors are used to seeing a fiery red-headed boy flit about in unusual costumes, nappy wigs and bare feet with pink toenails.

C.J.’s had strapped on his red helmet and took off on his purple scooter.  I was looking for the black scooter that I usually ride.

“I just remembered something!” C.J.’s Dad exclaimed entering the garage from the house.

“What?” I asked, moving bikes, balls and bubbles around in an attempt to locate my scooter.

“Whenever C.J. plays outside in girl clothes I’ve always worried that people will think that he is in trouble.  I know now why I feel that way.”

“Why?” I asked, stopping my scooter search to listen to my husband. 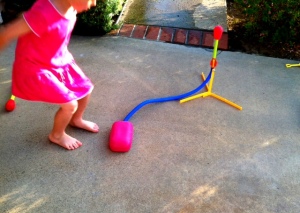 “When I was a little I knew this kid named Ben.  When he got in trouble or did something wrong or did bad at baseball practice, when he got home his dad would make him put on his sister’s clothes and ride her bike up and down the neighborhood.”

“Are you effing kidding me?!” I said, making sure that C.J. was out of earshot.

“No, one time in high school, Ben did something wrong and to punish him his dad made him put on his mom’s bra and panties and sit in a lawn chair in their front lawn.”

“Why have you never told me this before?!” I said in shock.

“I don’t know, I never really thought about it, but when I’ve seen C.J. playing out front in girl clothes I’ve always associated it with him being in trouble and being punished.  I assumed everybody was thinking that he did something wrong.”

“Oh, they are probably thinking lots of things, but not that!  What did you say to Ben about his father’s method of punishment?”

“I told him that it was weird and that my parents didn’t do that,” C.J.’s Dad said.

“What is wrong with people? That is so disturbing,” I said locating the scooter, though now I didn’t feel like riding it.

What if people thought that C.J.’s Dad and I were punishing C.J. by making him wear girl clothes outside of the house?

I watched my son as he hopped off of his scooter, picked several daisies from our neighbor’s yard and held them in his proud grip as he scooted to deliver them to me with a beaming smile on his popsicle-stained face.  He didn’t look like he was being punished.

I Googled Ben later that evening to see what became of him.  Ben is a professional athlete.  If Ben messes up at sports now does his dad still make him put on girls clothes and parade around for all to see?  I wonder.

RaisingMyRainbow.com is a blog about the adventures in raising a fabulous, gender creative son.
View all posts by raisingmyrainbow →
This entry was posted in All Posts, Main Site Header and tagged Gender, gender creative, gender nonconforming, Gender Stereotypes, Orange County, parenting, Raising My Rainbow. Bookmark the permalink.

27 Responses to Dresses as a Form of Punishment