C.J.’s graduation from pre-kindergarten was overflowing with all of the pomp and circumstance that you’d expect to accompany the age-old right of passage marking the end of preschool (with its wait lists and tuition higher than a car payment) and the start of elementary school (with its nearly 2,000 students who span the ages of five to 12).

My two sons on graduation day.

C.J.’s last days of the school year were so themed that Walt Disney might have learned a thing or two.  The culmination was a Hawaiian-themed graduation ceremony featuring   a multi-song performance by the graduates, the crossing of the stage to accept diplomas and a potluck BBQ that offered no less than three different types of salad.

When C.J. learned that graduation was a themed event, he immediately threw himself into planning his outfit.  Duh.

He went searching through his dress-up bins looking for his grass skirt that I brought back from Hawaii last summer.  He couldn’t find it.  Maybe because it had morphed into a tangled, grassy mess with at least one piece of gum in it and it ended up in the trash.  Maybe.

“But I NEED a grass skirt for my Hawaii graduation.  I NEED to look like a hula girl,” C.J. informed me.

I, in turn, emailed Ms. Sensible to let her know that my son would be wearing at least some portion of a hula girl  get-up to the graduation ceremony.  We were going out of pre-k with a bang.

I let him look for the long-gone grass skirt for two days, because it kept him busy.  And because I would never admit to purging it.

Ms. Sensible replied to my hi-my-son-wants-to-wear-a-skirt-to-graduation email.  She let me know that a few of the girls in class planned on wearing grass skirts to graduation and that C.J. should feel free to do the same if he wanted to.

We set off to Party City to replace the lost/trashed/missing grass skirt.  As luck would have it, they were just setting up three aisles of luau party supplies that will remain intact until they are converted to the costume aisles for Halloween. 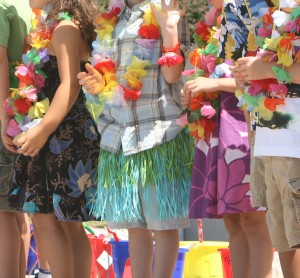 C.J. in between his two best girl friends.

“I thought you’d want the rainbow one for sure,” I said.

“I think I want the blue one,” he said after some more consideration.

I was speechless, C.J. has never, ever, picked a blue anything.  I was afraid he was picking it because, if he was going to wear a skirt for all of his classmates and their families to see he felt like it would be safer to wear a boy-colored one.

“Baby, it’s up to you if you want to wear a grass skirt or not.  It’s your choice.  And, you can pick any color you want,” I reminded him.

“Are you sure?  Once we buy it that’s it, no going back, no changing your mind,” I said.

We got home and he immediately put the skirt on.  He moved throughout the house all evening very carefully, so that he wouldn’t get his grass tangled.  Before he went to bed that night, he laid out his outfit for the next day’s graduation ceremony.  Light blue and cream plaid shirt, khaki shorts, brown sandals, blue and green grass skirt, rainbow lei and a fake corsage for each wrist — one blue and one red.  He put extra leave-in conditioner in his hair because he is convinced that the berry-smelling spray makes his hair grow longer and prettier faster.  He got in bed early and didn’t fall asleep until after 11 p.m.  Tomorrow he would be a graduate.

“I like your hula-girl skirt, C.J.,” Molly said.  “My mom wouldn’t let me wear mine.  You’re lucky your mom let you wear yours.”

As I watched C.J. on the stage, I was one proud mama.

“Look at the little boy in the skirt!” a woman said behind me and I heard a few laughs.

C.J. getting his diploma.

Yep, that was my son, up on the stage in a skirt for the world to see singing “I’ll Be Going to Kindergarten Next Year” to the tune of “She’ll Be Coming ‘Round the Mountain.”  People could laugh and point all they wanted.  I didn’t care.  Not today.

After the graduation ceremony, I was in line for the potluck lunch when Ms. Sensible approached me.

“I just wanted to say that it was a such a pleasure having C.J. in my class this year,” she said.

“Oh my gosh, are you kidding me?  I was going to thank you for being so amazing.  I know that we are high maintenance and you’ve never taught a kid like C.J. and you taught him with an open mind and an open heart and that’s all we ask for,” I gushed.

“Well, I really enjoyed C.J. He allowed me to learn something new, I love learning new things.  And, I’ve watched him grow so much emotionally, socially and academically.  I’m just really proud of him.  I hope you’ll stop by to visit me next year when he’s in kindergarten,” she said.

Kindergarten.  It’s 87 days away and I have no idea what C.J.’s next teacher will be like.  I hope that she’ll be a lot like Ms. Sensible, and Ms. Sunshine who came before her.

45 Responses to My Son’s Graduation Skirt