Posted on July 9, 2012 by raisingmyrainbow

“Mama, is this football or baseball that I’m playing right now?” C.J. asked as he attempted to field ground balls, looking completely overwhelmed.

“You’re playing baseball. Do you like it?” I said.

“No,” he said matter-of-factly. 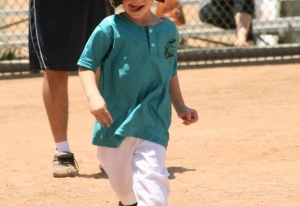 I said nothing. I smiled as I looked around. My five year old was the only boy on the team who didn’t know what sport he was playing.

He can’t be bothered to keep things like that straight. He can name every Disney princess and her movie of origin, specific shades of pink and purple, and the difference between a braid, a french braid, a ponytail and pigtails. But, baseball and football have no defining characteristics that set each other apart in his brain.

C.J. had tried baseball before. It didn’t exactly go well, he didn’t exactly like it, but that was nearly two years ago and we wanted him to give it another go. He shies away from athletics and we don’t want him to. He’s tried baseball, flag football, soccer, gymnastics and swimming. We want him to feel comfortable competing, being part of a team and being athletic.

“What’s a mariner?” he asked his dad. 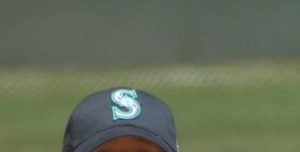 C.J. loved his shiny teal jersey and hat with an “S” on it.

“What team are you on?” Nana Grab Bags asked C.J.

“You’re not on the sailors, you’re on the Mariners,” I corrected C.J.

The Seattle Sailors were comprised of four and five year olds, all boys, most of them had little to no baseball experience. They met every Sunday for a 45 minute practice followed by a one inning game.

On the way to the first practice/game, C.J. insisted that he didn’t want to play baseball anymore.

“Well, you haven’t even started yet, how do you know that you don’t want to play?” I asked.

“Cause I know,” he said looking out the window with arms tightly crossed against his chest. His pink and purple fingernails peeking out.

About half of the kids on the team had a dad by their side throughout the practice and the game. C.J.’s Dad was there every step of the way, coaching C.J. and reminding him that he would get a snow cone from the snack bar after the game if he tried his hardest.

The Sailors were up first. The league supplied four batting helmets: two black, one navy blue and one pink. The boys in the dugout avoided the pink helmet like it had the plague, or worse — the cooties. Not C.J. As his turn to bat neared he proudly put on the pink batting helmet. His dad was acting as first base coach and watched the scene unfold from a few feet away.

None of the boys said anything to C.J. about his helmet choice. They were probably all glad that they wouldn’t have to wear the pink helmet since it was on his head. C.J. was next up to bat and one of the other fathers walked up to him and started to remove the helmet.

“You don’t want to wear a pink helmet buddy,” he said as he pulled it off of C.J.’s head.

C.J.’s Dad left his job at first base.

“Actually, he wants to wear the pink helmet,” he said to the other father.

C.J. skipped to home plate for his ups. He hit the ball and I watched as my boy in the pink helmet ran straight to third base while his dad yelled to him from first base. C.J.’s Brother laughed uncontrollably.

After every player on our team had a chance to hit the ball and run the bases, it was time to play the field. C.J. was shortstop with his dad by his side. I could see it; C.J. started to get bored. Halfway through the other teams’ ups, I watched as C.J. dropped his baseball mitt to the ground and took off his hat with the “S” on it and threw it to the ground. He casually walked off of the field. C.J.’s Dad didn’t notice that he’d been ditched until C.J. had reached the dugout, where he promptly began collecting his things.

“What are you doing?” I asked C.J. when I got to the dugout.

“I’m all done. I only like baseball when I’m hitting the ball,” he said informatively.

“That’s how everybody feels, but you gotta go out there and catch the ball and try to get the other team out,” C.J.’s Dad said.

“No, thank you,” C.J. said, now sitting on the dugout bench and swinging his feet.

The inning was over, marking the end of the game.

“Did you try your hardest?” I asked.

The five following games went much, much better and C.J. was super-excited when he got a participation trophy after the last game.

“Can I have a trophy with a girl baseball player on top instead?” he asked pointing to the gold male on the top of the trophy he had been given.

“Oh, so you want to play baseball again?” I asked.

“No, never mind. I don’t want to play baseball ever again, but if I did, I’d want to be on a girls’ team, not the Sailors.”