My Son Draws Himself As A Girl

Posted on September 19, 2012 by raisingmyrainbow 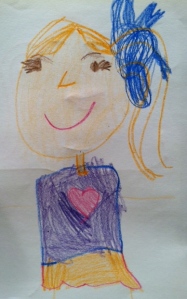 In the mediums of crayon, colored pencil and marker, our son is a beautiful girl with long red hair, a big puffy ball gown the color of cotton candy and a tiara with a gigantic heart-shaped stone front and center.  Sometimes he’s a sassy girl in a jean skirt, black leather jacket and knee-high boots.  Sometimes he’s a girl going to school in a hot-pink t-shirt dress and purple high top sneakers with turquoise socks peaking out.

It took his dad and me a while to get used to seeing our son’s self-portraits.  For a long time there was the urge to correct him, to remind him that he is a boy and his renderings weren’t accurate.  We fought that urge until it wasn’t there anymore.  Feelings of uneasiness popped up in us here and there when it was time for arts and crafts, especially when there were other people around.  I’ve had to remind myself that you never tell an artist that his or her art is bad or wrong — art can’t be those two things (especially when you are five).

Being acutely aware that children who continually, over an extended period of time draw themselves as the opposite sex are more likely to be transgender, we have always wondered if and when the day would come when our boy would draw himself as a boy looking like a boy.  We imagined that if it ever happened we would feel a sense of relief and happiness.  Then, it happened and we were nothing but sad. 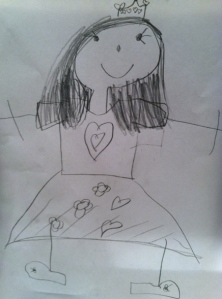 C.J. has just started kindergarten and at his school every kindergartner is matched up with a “Kinderbuddy,” an older student at the school who will see C.J. on a regular basis throughout the year to read to him, play with him and mentor him.  Hopefully they will have a mutually beneficial and special relationship.

Because the school tries to match up Kinderbuddies based on sex/gender, C.J.’s Kinderbuddy is a boy.  Because C.J.’s sex and gender aren’t in total alignment, that process for matching up Kinderbuddies isn’t exactly ideal.

On their first day of meeting, the Kinderbuddies had to sit together and draw a picture of themselves together.  That’s when it happened; C.J. drew himself as a boy next to his boy Kinderbuddy. 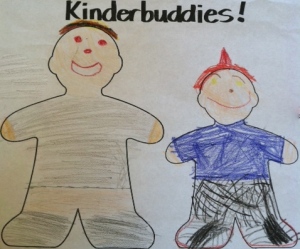 He showed us the picture that they had drawn together.  We didn’t recognize our son.  We looked at each other in shock.

“Hey, Buddy…how come you drew yourself as a boy?” C.J.’s Dad asked casually.

“Oh, that’s because I didn’t want my Kinderbuddy to know that I like girl stuff,” C.J. said matter-of-factly.

Our hearts sank.  We had always thought that things would feel more right, more normal, on the day that C.J. finally drew himself as a boy, but things didn’t.  Things felt sad because our son had to do it out of self-preservation.  He did it to adapt and conform.  He did it to hide his true self.  It felt like he had lost some of his innocence.

“Gender creative children are blessed with the ability to hold on to the concept — that we all had one time in our lives — that we were free to be anything we wanted – boy, girl, maybe both.” 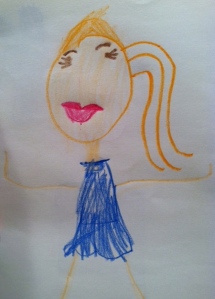 C.J. didn’t want to hang his Kinderbuddy drawing on the fridge or his bedroom door for all to see like he usually wants to do with his art.  He wanted to throw it away.

“Cause that’s not really me,” he said as he sat in the sun at our dining room table, drawing himself with a side ponytail, purple shirt with a pink heart on it and an orange skirt.

RaisingMyRainbow.com is a blog about the adventures in raising a fabulous, gender creative son.
View all posts by raisingmyrainbow →
This entry was posted in All Posts and tagged gender creative, gender nonconforming, kinderbuddy, Kindergarten, Orange County, parenting, Queerty, self portraits, transgender. Bookmark the permalink.

76 Responses to My Son Draws Himself As A Girl