Posted on December 18, 2012 by raisingmyrainbow

It was the most sincere display of appreciation that my five-year-old son has ever shown.  He looked me straight in the eyes and said a very mature and worldly “thank you.”  The words were full of honesty, relief, happiness and a little bit of anguish.

“You’re welcome, baby,” I said looking at him with a smile and masking the pain I was feeling.  “You look so pretty.”

My gender creative son was thanking me for buying him a dress to wear to Christmas Eve dinner.

He had eyed the ensemble at Target weeks ago and asked to wear it for Christmas Eve so he could take “fancy pictures by the fireplace and the tree.

I told him no.  Not because the outfit was made for girls and he is a boy, but because had I bought it then he would have wanted to wear it immediately and often and when we finally sat down to Christmas Eve dinner it would have been thrashed.

He talked about his “Christmas outfit” nonstop and asked everyday if it was time to go buy it.

Today was the day.  We got home and both ran up the stairs to my bedroom with its mirrored closets.   I sat on the floor removing price tags while he tore off his “school clothes,” which he wears as a disguise when out in society so that people will think he is all boy.  He wears “school clothes” so that he won’t get teased, have to sit by himself at the lunch tables and so he will get invites to birthday parties.  More than anything he wants to be thought of as “normal.”  But, he’s not.

He closed his eyes as I put on the black bubble skirt covered in sequins, the red long sleeved t-shirt that says “JOY” on it in glitter and the black sequined vest.  I spun him to the mirror.  He opened his eyes, took himself in and then thanked me.

My first reaction was to smile.  He reminded me of when I was a little girl and wanted a show stopping dress for the holidays.  My dresses were made of scratchy fabric that made noise when I moved.  I wore white socks with lace trim and stiff, shiny Mary Janes.  I learned at an early age that beauty is pain.

My son looked sassy and beautiful.  He looked natural, happy and truly comfortable for the first time that day.  Then I felt pain.  If the rest of the world could be more empathetic, accepting, welcoming and kind, my son could be this happy and comfortable all of the time — because then my son could be a boy who dresses like a girl and not have to think twice about it.  The world isn’t like that.

Other people can’t see the beauty in my son in a dress.  I haven’t always seen the beauty either.  Two and a half years ago this scene from my life wouldn’t have happened.  I wouldn’t have bought girl clothes for my son.  Never.  Ever.  Back then, I felt uneasy when he played with Barbies.  When he tried to dress feminine, I’d hand him his brother’s masculine hand-me-downs and tell him to put them on.  I didn’t give him choices because I knew that his choices would be pink with sparkles and rhinestones.  His choices would smell like the raspberry vanilla body spray he snuck from my bathroom and hid under his bed.

Then I realized that my actions were telling him “you can’t be you because I want you to be what society wants you to be.” 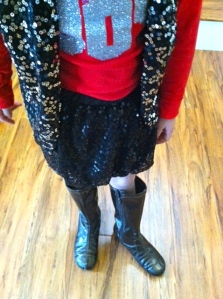 My husband and I changed the way we were parenting.  There was something unique about our son that we could choose to support or destroy.  We had to follow his lead.  He led us to the pink aisles at Target; and, that’s not a dangerous, harmful, unhealthy place for a boy to be.

My son’s Christmas dress is hanging in his closet.  He checks on it before and after school and a few other times each day.  On Christmas Eve, a dozen members of our family will gather around the table in honor of religious beliefs and to celebrate the passing of one year and the start of another.  It will be the first holiday that my son will join us at the table dressed as a girl.  We won’t care.  We will tell him that he is beautiful, inside and out.  And, we’ll mean it. 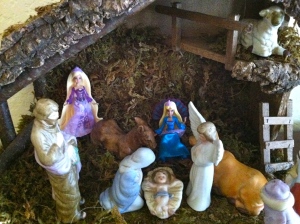 *This is my last blog post of the year.  Holiday wishes and greetings to all of you!  Let’s catch up in a few weeks.  xoxo, C.J.’s Mom

RaisingMyRainbow.com is a blog about the adventures in raising a fabulous, gender creative son.
View all posts by raisingmyrainbow →
This entry was posted in All Posts and tagged Barbie, Christmas, Christmas Eve, gender creative, gender nonconforming, Gender Stereotypes, Orange County, parenting, Queerty, Raising My Rainbow. Bookmark the permalink.

520 Responses to My Son’s Christmas Dress