Posted on January 8, 2013 by raisingmyrainbow

Well, hello there 2013, what do you have in store for us this year?

Mannequin head with human hair that can be heat styled = One of C.J.’s favorite Christmas presents.

Two years ago I started Raising My Rainbow because I had a two-(almost three)-year-old boy who liked “girl toys” and “girl clothes.”  I was full of questions and anxiety.  I didn’t know what was going on with my son and his preferences.  I didn’t know what I was supposed to do as his parent.  I had a million questions but no answers.  I used humor and writing to cope and started to feel my way down a path I hadn’t ever expected to take.

Then, things got emotional as my readers educated me and I realized that the simple act of my son playing with a doll could be a signal of much bigger things to come.  Was our son a girl born into the body of a boy?  Was he transgender, transsexual, effeminate, gay, gender queer, gender fluid, gender creative, gender nonconforming, something else?  What do those terms really mean anyway?

As parents, my husband and I have asked each other and ourselves questions that we never anticipated.  What if our son is gay?  What if our son is bullied?  What do we do when our third grader threatens suicide because he’s bullied for having a gender nonconforming brother?  Ten years from now, will we have two sons or one son and one daughter? 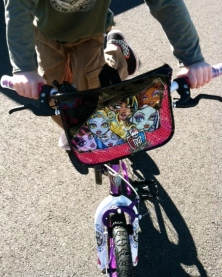 Another favorite Christmas gift? A Monster High bike with bag to hold his granola bars and bracelets.

During the last two years, we slowly got to the point where we knew the answer to each of the questions above and dozens of others.  It’s the same answer, no matter the question: We’ll deal with it.  We’ll love, support and provide a safe home for our children no matter what.  Realizing that answer gave us power and reassurance.

We began to own our differences.  All of us: Me, C.J.’s Dad, C.J.’s Brother and C.J.  We began to live free of shame.  Then, four months ago, C.J. started kindergarten and stopped owning it.  We’ve watched as our diva son who was once brimming with confidence and self-assuredness realized that his peers had less than favorable opinions about what he likes and wears, about how he talks and walks, about how he sits with his legs crossed like a girl and has a wrist that goes limp when not kept in check.

There was a time when our gender creative son didn’t care about what other people thought about him, but we did – big time.  We were stuck caring what others would think or say or do.  He owned it, but we didn’t.  We followed his lead.  We caught up.  And, when we started owning it and not giving a shit about the reactions and judgments of others, C.J. started noticing and caring and adjusting his behaviors accordingly.  It felt like we were two steps behind.  We caught up to him.  We were all at the same point for a time holding hands.  And, then C.J. took a step back, yanking us back with him.

Back we went, following his lead.  Loving him, not changing him.

He’s been rocking his new beanie day and night.

I hope that you’ll continue to follow and be a part of our adventures.  There’s comfort in knowing that you care and are cheering us on.

RaisingMyRainbow.com is a blog about the adventures in raising a fabulous, gender creative son.
View all posts by raisingmyrainbow →
This entry was posted in All Posts and tagged effeminate, Gay, Gender, gender creative, gender nonconforming, Monster High, raising a gay child, Raising My Rainbow. Bookmark the permalink.