Posted on February 26, 2013 by raisingmyrainbow

Since my invitations to the Oscars and the evening’s multiple fancy parties seemed to have gotten lost in the mail, I decided to watch the Oscars with Nana Grab Bags at her house.  I took C.J. with me and Nana Grab Bags bought a few crafts for him to do with Pa while we watched the festivities.

“Is that the girl from Dance Moms?” he asked.

“Is that a girl or a lady?” he asked dumbfounded.

“Yes, a real lady.  She’s older than me,” I said, mostly because I like to point out when people are older than me.  It makes me feel full of youth and vigor.

“Yeah.  You should hear her sing, you would love it.”

“Jessica Chastain,” I said.  Her and C.J. have similar color hair.

“I’m going to grow my hair out like that,” he decided.

“Okay.”  This was a different Oscar viewing experience than I was used to.  Nana Grab Bags is pretty quiet when we watch together.  C.J. is not.

There was Jane Fonda is a shocking yellow dress that I didn’t particularly care for.

Then, along came Quvenzhané Wallis with her puppy purse.

“Is Uncle Uncle going to be on this show?” he asked out of the blue, stealing kettle corn from my bowl.

“She made Bradley Cooper, so she can wear whatever shoes she wants,” I said.

Then, he saw Halle Berry’s dress and was in shock.

“That dress is totally inappropriate.  You can almost see her boobs.  That was not a smart choice.”  C.J. has been working on making smart choices for more than a year now.  According to C.J., Halle Berry’s dress choice was not smart.

“Ohhhhh, now that’s my favorite dress!” he said when he saw Anne Hathaway.

“I like it because it is pink, but I wish her hair was long like yours mama,” he said smiling up at me and stealing my iced tea.  If I cut my hair, I’d break his heart.

“Mama, what dress is your favorite?”

“No, it’s not that fun,” he said shaking his head.

The show eventually started and soon Charlize Theron was dancing across the stage (though my eyes were on Channing Tatum).

“If she’s going to dance like that, she really should be singing,” C.J. said with his right leg crossed over his left and his arms folded.

Seth McFarlane started singing a song about boobs, which elicited giggles from C.J.

Jennifer Aniston appeared on stage in a vivid red dress to present an award.

“Wow, there are a lot of ladies looking sexy tonight!” C.J. exclaimed.

“There sure are,” Nana Grab Bags said in agreeance.  I gave them both a look and she just smiled at me and shrugged her shoulders like she couldn’t possibly disagree with him because he was speaking the truth. 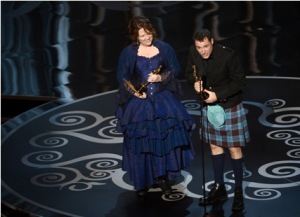 Brave won for Best Animated Film, which was disappointing to C.J. because he was voting for Wreck It Ralph.  Then, he saw Director Mark Andrews get up from his seat to accept the Oscar.  Andrews was wearing a kilt.

“Is he gender nonconforming?”

“Me too, I think he looks the prettiest.  When I get invited to the night when everybody dresses fancy I’m gonna wear that man’s skirt and that little girl’s dog purse.  And, have red hair like that one lady.”

There, it’s all settled; C.J. has selected his Oscar outfit.  Now he just needs an invite.

RaisingMyRainbow.com is a blog about the adventures in raising a fabulous, gender creative son.
View all posts by raisingmyrainbow →
This entry was posted in All Posts, Main Site Header and tagged Brave, gender nonconforming, Oscars, Queerty, Raising My Rainbow. Bookmark the permalink.