Posted on May 8, 2013 by raisingmyrainbow

It’s C.J.’s Brother’s birthday week! We started off celebrating his decade of awesomeness with a party at Dave and Buster’s – which I deemed a total and complete stress-free success…but, then again, I didn’t have to drive home five 10-year-old boys who were hopped up on sugar, hitting each other with the inflatable hammers they won gaming and telling fart jokes mingled with “your mom” insults. That was C.J.’s Dad’s job.

Monday we were recovering from the party and prepping for the next day’s actual birthday. I was attempting to write a blog post on Monday night when someone sent me a Huffington Post article written by Randi Zuckerberg, sister of Facebook founder Mark Zuckerberg.

Zuckerberg thinks that mothers like me are doing a disservice to our children and that we are doing so without thinking about the consequences.  If she only knew how much I thought about my children on a daily basis.

“We need to encourage our children to be individuals and to explore their passions and talents. At the same time, we do have to acknowledge that we live in the real world, not a fantasy world. Your child is inevitably going to come into contact with other kids, who can be mean and cruel — is it possible that we do our children a disservice by not preparing them for the outside world?…This might mean having a realistic discussion at a young age about why other children might not understand a young boy wearing dresses and high heels and why it’s in his best interest to limit that behavior for now. I’m not sure we’re doing them a favor by just sending them straight into the lion’s den without a warning about what’s in store,” she wrote.

She supported her argument by quoting parenting guru and gender expert Kanye West. 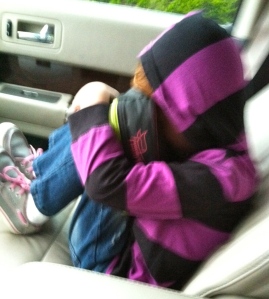 Someone may have been having an attitude because it wasn’t his birthday.

The article got me so worked up that I couldn’t focus on the blog post  I had started. I turned off my laptop and spent the rest of the evening wrapping C.J.’s Brother’s birthday presents while watching Real Housewives of Orange County and stuffing leftover Easter candy into my mouth hole like it was going to expire the next day.

I was getting more and more agitated. I was exchanging hurt-angry-sarcastic texts with friend, fellow pink boy mom and blogger Kelly. I was preparing for a sleepless night when an email from one of my favorite writer friends and fierce mamas landed in my inbox. The Huffington Post’s Amelia was coming to the defense of gender nonconforming mothers everywhere — even though her gay son is gender conforming.  At a time when my words were unorganized and scrambled, Amelia’s were clear, firm and perfect. Read her full rebuttal here.

I think her entire post is a sample of Grade A badassery and I’m hugely thankful that she penned it.  Here are my favorite chunks.

“Pink boys or gender nonconforming boys have been a popular topic of conversation these days. People who have gender-conforming children (or no children at all) are always ready to put in their two cents about what they would do…Until you are actually a parent in that situation, you don’t know what you would do…”

“I am fortunate enough to call some of these moms my friends. Sarah Manley, Lori Duron and Kelly Byrom have not only stood by their children publicly but shared the sheer beauty and joy of their children in words and photographs. I can say for certain that none of these women takes sharing lightly. They are well aware of what people think and what people say, but they have made the decision to put their families out there, not for notoriety but in an effort to help other parents who are going through the same thing. Every one of them has had uncomfortable conversations with a very young child about the assholes who make fun of them for being themselves. They don’t live in a bubble. They live in the real world, and they are trying to make that world a better and safer place, not just for their kids but all kids.”

“… I stand strong with the moms who post about their gender-nonconforming children. We are sisters in the same fight. We are standing up and fighting for our children’s right to be who they are. And we are fighting homophobia, because — let’s be honest — that’s really what this is all about….By not hiding who our children are and by being proud of them, we are sending them the message that they are perfect exactly the way they are.”

“…I will not hide who my child is for the sake of others, because I will not teach my child to be ashamed of what makes him the amazing little man whom it is my privilege and honor to parent. Yes, there are bullies, but I will not be one of them.”

C.J.’s birthday present to his brother was this picture of the two of them. C.J. is the one in the skirt.

Thank you, Amelia, for writing this. And, thanks to you, Kelly and Sarah for always, always, always having my back and being there for me and my son. As Kelly has said, you mess with one of us, you mess with all of us. Thanks, ladies, for inspiring me, supporting me and being a group with which I can say the eff word much more than a good mother should. 😉

RaisingMyRainbow.com is a blog about the adventures in raising a fabulous, gender creative son.
View all posts by raisingmyrainbow →
This entry was posted in All Posts, Main Site Header and tagged Amelia, Gender, gender nonconforming, Huffington Post, Kanye West, Mark Zuckerberg, Randi Zuckerberg. Bookmark the permalink.