LGBTQ Politics on the Playground

All photo credits: C.J.’s Dad (cause when I say I need playground photos, he gets the job done.)

I admit it; I can very easily get myself all worked up when people talk ignorantly about LGBTQ issues.  Even when the person talking ignorantly is five years old.  I should have more self-control, but I don’t.  So there.

“Mom, Marina from my class told me that boys can’t marry boys,” C.J. said as he climbed into my car after school.

“I said yeah-huh, that boys can marry boys and girls can marry girls.”

“She said that I was wrong and lying and that boys can’t marry boys and if I kept saying that she was going to tell the teacher on me.”

The feisty part of me (which makes up about 80+ percent of my personality) wanted to get out of my car, find Marina and her mom in the parking lot and explain to them that boys can marry boys.  Not in our state of course, but in some other states.  And, it’s not federally recognized.  But still.

Here’s the thing. I feel like Marina wasn’t spreading a message in support of marriage equality when she was informing who knows how many kindergartners that boys can’t marry boys.  I feel like she was saying that it’s not right for boys to be in relationships with boys, period.  The way C.J. relayed the conversation to me her tone was negative and antagonistic.

How did the topic come up anyway?

I reminded C.J. that we know lots of boys who are married to boys.  I started naming off couples but was interrupted.

“Oh, good, can you write those down so I can show Marina a list tomorrow?” C.J. asked.

Was I really going to draft a list of the married same-sex couples for C.J. to take to school to prove his point?  No.  Should I have?

A few weeks ago, I overheard one of my friends on the phone and could tell that her son was having an issue at school.

“I didn’t want to tell you and get you all fired up….” she trailed off.

“Oh, well now you have to tell me!” I said animatedly.

“At school the other day, on the playground, a little boy told my son and some other kids that gay people get sick and die,” she said.

“I didn’t want to upset you.  I’m taking care of it,” she said calmly.

“Does your son think that Uncle Uncle is going to get sick and die?” I asked.

“He may have, but I explained that that is not the truth,” she said. 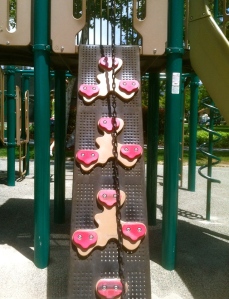 Ugh!  Where do these kids get these ideas?  From their parents.  And, why are they talking about such things on the playground?  Because they know – starting in kindergarten and first grade – that the subjects are “odd” and “weird” and “taboo” and “titillating.”

But, to my kids, boys being married to boys are so commonplace that it doesn’t warrant a second thought or consideration.  It’s as “normal” as their dad and me being together.

And, to my kids, gay people don’t get sick and die.  At a recent BBQ, after seeing his dad and me in swimsuits in the pool with a handful of gay men, C.J.’s Brother actually pointed out that gay men tend to be in better shape and eat healthier food than we do.  (I’ll have you know that I cut back on carbs for a day to make myself feel better.)

So, yes, I’m easily excitable and, then, usually move on to a next thought just as easily.  My next thought was…what if years from now Marina wants to marry a girl?  What if that little boy on the playground is gay, but doesn’t want to get sick and die?  By teaching their children these things, have the parents done them a service or disservice?  Because, I don’t know about that boy on the playground, but I do know that, should she choose to get married, Marina would make a beautiful bride no matter her partner.  And, I hope her parents don’t ruin that for her.

24 Responses to LGBTQ Politics on the Playground