Posted on December 18, 2013 by raisingmyrainbow

C.J. can hardly wait for Christmas.  No.  I mean it.  I’m not sure he can wait.  He’s never been particularly patient.  He’s tried to convince me that if he eats two chocolates out of his advent calendar every morning, two days will pass in one and Christmas will come sooner.  He has also tried to convince me to let him open one present every night like his Hanukah-celebrating classmate gets to.

His Christmas wish list has been done for weeks.  He keeps it in various “safe places” – like under his pillow, in his dirty clothes hamper, rolled up and jammed in the shower of his Barbie Dream House and folded up in his jewelry box.  He wouldn’t let me send the hard copy to Santa lest he forget the items on the list; so he instructed me to “email text it to Santa on Instagram.”  Rest assured that I did just that and hashtagged it #americangirldollsareexpensive, #ithoughtwewereluckyenoughtoskiptheamericangirldollphase and #pleasehaveyourelvesmaketheamericangirldollsothatidonthavetobuyit. 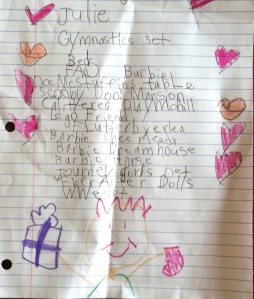 Yes, at the top of C.J.’s wish list is the American Girl doll named Julie Albright.  She’s a San Franciscan from 1974 with long, silky blonde hair.  Second and third on C.J.’s list, are gymnastic equipment and a bed for Julie. 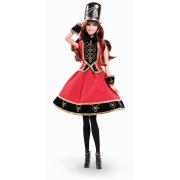 You’ll see on the list that C.J. has also been coveting the Barbie FAO Schwarz Toy Soldier Doll offered exclusively by Toys R Us – which says that the doll is “the perfect gift for any girl!”  I think she’s fabulous and would love to wear her complete look from head to toe.  She may already be wrapped and under our tree, allegedly.

C.J. wants every Monster High doll.  I asked him why he didn’t put them on his list and he said because Santa and everybody in the world already know that he wants them.

He put a Barbie Dream House on his list even though he already has one.  When I asked him about it, he explained that he wants to make New York City in his bedroom and have lots of buildings, skyscrapers and apartments for “his girls” (his girls = every 11 inch doll that he owns).

At the bottom of the list, you’ll notice he wants a WWE wrestling ring set.  That one really surprised me.  When asked about it, I learned that C.J. likes the figurine that it comes with (you should zoom in to take a closer look) and he thinks that ring will go well with his Monster High dolls.

Researching and writing the wish list was a labor intensive task for C.J.’s personal life.  For his academic life, he spent quality time decorating a giant construction paper gingerbread person.  Here it is:

It is half girl and half boy.  I’ve been told that the boy parts are the pants, sunglasses and lips.  The girl parts are the peplum (I hate peplums and C.J. loves them.  When it comes to this matter, we’ve learned to agree to disagree), the hair and the jeweled barrette.  The shirt is covered in candy and candy is for everybody and, so, the shirt is for boys and girls.

This Friday is the last day of school before C.J.’s two-week winter break.  There’s going to be a party and book exchange.  Here’s the fine print:

…because books aren’t for everybody, there are “books for boys” and “books for girls.”  When I read the note to C.J. he said, “so, I’m going to get a book that I don’t want?  A boys book?”  For his contribution to the book exchange, he selected Yakov and the Seven Thieves because he thinks that it looks like boys will like it and, more importantly, because it was written by Madonna.  He had me sign the gift tag “To a boy or a girl, Love C.J.”