My Son Has Discovered Figure Skating

Posted on February 12, 2014 by raisingmyrainbow 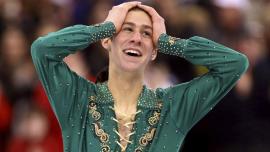 In mid-January, one of my friends posted on my Facebook wall:

Friend:  I was watching that viral video of Jason Brown ice skating, and I had this sudden realization that your son is about to experience Olympic-level ice skating.

Me: He doesn’t even know what he’s in for. I am ridiculously excited.

My friend was right — probably because if he lived closer and were 30 years younger, he and C.J. would be inseparable and a fierce force to be reckoned with.

I waited weeks for the Olympics to get underway and set the DVR to record.  Over the weekend, Matt and I sat down with our sons to watch the games.

Chase loved the snowboarding and skiing events.  C.J. only loved them when somebody crashed.   Which is rude, but honest, I guess.

When figure skating came on, I watched C.J.

“Is this still the Olympics?” he asked confused.  How could we have possibly gone from barreling down a mountain on a board to dancing gracefully on glimmering ice?

We were watching Meryl Davis and Charlie White compete for the U.S.

“If they kiss we’ll know for sure that they are in love,” he assured me.  They never kissed.  They must not be in love. 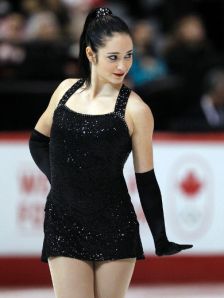 “She’s really good,” I said when she was finished.  Stating the obvious.

“Well, she’s 18, what do you expect?!” he said as he turned to give me an exasperated look.  When he took his eyes off of the screen the judges delivered her results.

I grabbed my laptop and pulled up the video of Jason Brown’s long program at the U.S. National Championships last month.

“Wait.  A.  Minute.  I love his ponytail and glitter costume.  I like his style,” C.J. exclaimed.

He watched the video, entranced for seven minutes and 22 seconds.  At one point he was clapping as he watched.

“What are they throwing at him?!” he asked at the end.

“Cause they liked him so much.”

At night, while C.J. was in bed, I watched Jason Brown skate the same performance at the Olympics.  It was perfect, except that he had a small fall.  My heart broke, for Jason and my son.

The next night C.J. wanted to watch Jason Brown at the Olympics, so I turned it on.  C.J. watched the television and I watched C.J.

“What?  What was that?!  What just happened?  Was that part of the routine?” C.J asked not taking his eyes off of the screen.

“No, he fell.  And, then he picked himself up and kept on going.

It was time for Jason’s score.  153 point something.

“Well that’s good.  Anything over 100 is really good because 100 is a lot.” C.J.’s hand was on his chest in relief.  We know nothing about figure skating scoring, but Jason was smiling and seemed happy so we were too.

My friend Nerdy Apple sent us a video of Jason Brown skating at the Olympics with fart noises strategically overlaid.  Farting Figure Skating.  I tried to show it to only Chase, but Chase was laughing so loudly that nosey C.J. came running downstairs inquiring about what was so funny.

“Show him, show him, you’ve got to show him!” Chase said through a crying, pee-your-pants laughter.

“Is that for real?  Was he farting the whole time?” he asked very seriously.

It took a minute for him to accept it and get over the shock.  Then he smiled.

I did and he laughed too.   A fart joke aficionado, C.J. now loves Jason Brown even more.

28 Responses to My Son Has Discovered Figure Skating