My Son’s 10th Birthday Was A Drag

Posted on February 12, 2017 by raisingmyrainbow

In some ways, C.J.’s recent birthday party was like your average 10-year-old’s birthday party. The birthday boy sat at the head of a long table eating something made mostly of sugar. Presents were stuffed around him. The crowded room was a loud mixture of music and happiness.

Then four drag queens took the stage and performed Peggy Lee’s hit “I’m A Woman” while my son cheered and threw dollar bills at them.

Walking to drag brunch. Hand-in-hand with his dad — as always.

“What do you want to do for your birthday?” I asked C.J. weeks before he entered the realm of double digits.

“I want to see my first drag show,” he said with a smile, squeal and fluttering hands.

I’d been to a drag brunch before at VLVT Lounge in Orange County. I emailed them to see if children were allowed to attend. Turns out, they were thrilled to host C.J.’s birthday party.

Finding a place to have C.J.’s drag birthday party was easy. Finding guests to attend was not. Not every fourth grader’s parents feel comfortable dropping their child off at a gay club on a Saturday for a party. I get it.

The night before drag brunch we had a cake for C.J. at home. He made a wish and blew out the candles.

“Do you want to know what I wished for?”

He always wants to tell everybody what he wished for. He does not at all believe that keeps the wish from coming true.

“I wished that RuPaul would be at my drag brunch birthday party!”

The next morning he put on his LED sneakers, jeggings, striped moto jacket, choker and cat ear headband. Then he sat and carefully applied makeup. His favorite eye shadow shades are Warning, Seize and Goldmine by Urban Decay.

Our small but fierce celebratory group met in front of the club. The final guest list included C.J., Matt, Uncle Michael, Uncle Michael’s friend Martin and two of my best friend’s daughters. We walked the red carpet and took pictures. C.J. felt like a star. He thought that everybody at VLVT that day was there for his birthday (even though they were there for their own birthdays, bachelorette parties, etc.) 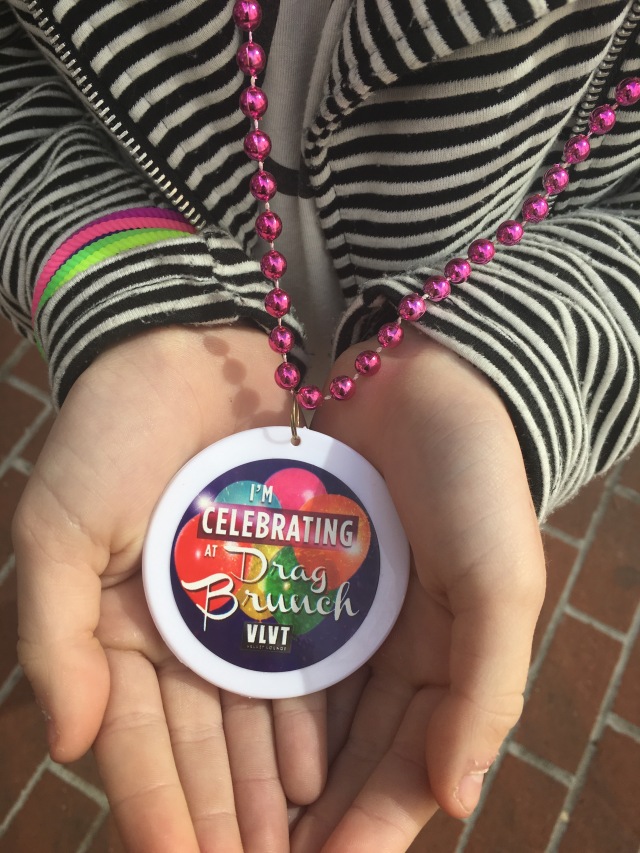 VLVT gave C.J. a special necklace to indicate that he was celebrating something big. A decade of life!

The show got underway and much to C.J.’s delight one of the queens — Venus D’Lite — had appeared on RuPaul’s Drag Race, season 3. If you are in any way remotely affiliated with RuPaul’s Drag Race, C.J. thinks you are the coolest and holds you in very high esteem. The other queens were Trinna Modele, Dani Kay and Big Dee.

VLVT spoiled C.J. with the best view in the house.

C.J. opened his presents. Uncle Michael happened to give him 50, crisp one dollar bills in a nice stack to use to tip the performers. To a 10-year-old, few things are better than throwing money at people.

“I’ve always wanted a huge stack of money like this,” C.J. said. Then he had me take several pictures as he fanned himself with it.

The queens put on an amazing show. Bless their glittery hearts for trying to keep it as kid-friendly as possible.

C.J. was pulled on stage twice to perform with the queens. Here he is with his favorite queen of the day, Miss Dani Kay.

Meeting and greeting with the queens after the show. Who knows what he is telling them.

C.J. at Starbucks after brunch, checking out pictures on Uncle Michael’s phone and wearing the wig his best friends gave him.

“Going to drag brunch is exhausting, but we should go back. We should go every weekend,” C.J. said as I was tucking him in that night.  “Can you make reservations?”

I closed his door and thought about how far we have come in accepting and supporting his gender nonconformity. When he was turning three, we were uneasy and anxious when he wanted to have a Disney Princess-themed party and invite his whole class. Seven years later Matt and I both got emotional and beamed with pride when he was given the chance to dance onstage with drag queens.

We wouldn’t change our child or this parenting journey for anything. Happy birthday, C.J. Thanks for letting us grow with you.

RaisingMyRainbow.com is a blog about the adventures in raising a fabulous, gender creative son.
View all posts by raisingmyrainbow →
This entry was posted in All Posts and tagged Birthday, Drag Brunch, gender creative, gender nonconforming, LGBTQ, Orange County, parenting, VLVT Lounge. Bookmark the permalink.

44 Responses to My Son’s 10th Birthday Was A Drag