Inside the Mind of a Gender Creative Boy

Posted on August 24, 2017 by raisingmyrainbow

I hear from a lot of adults raising gender expansive four and five year olds. The adults are typically stressed, confused, lonely and scared. I get it. I’ve been there. Ages four and five were the toughest for us in terms of parenting a gender expansive child. I tell families that it gets better once the child can communicate his/her thoughts and feelings. Like, now, with C.J. being 10 years old and getting ready to start fifth grade, if I have a question about him, I can ask him and he can answer. I asked C.J. what he remembers thinking and feeling when he was four and five years old and I wrote it all down. I’m hoping that sharing C.J.’s memories below might help families currently wondering and/or struggling. xoxo, Lori 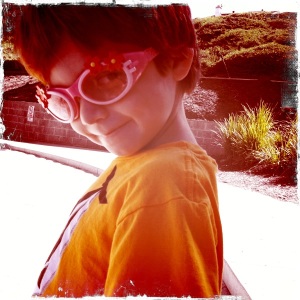 When I was two years old I kind of liked cars and knights and stuff because that’s all the toys we had. When I got closer to three years old, I started to like pink, purple and princesses. By the time I was four years old, I liked everything girl stuff. I really liked the way girls’ hair and dresses moved.

In preschool and kindergarten, I got the hint that I wasn’t like other boys my age. They would wear superhero stuff and I would wear clothes that were more feminine. I even wore Little Mermaid pajamas on pajama day and a Monster High costume on Halloween.

At that time I don’t think I really cared what other kids thought about me. When you’re in preschool and kindergarten and you’re different, the other kids don’t really care as much. My mom says I used to ask every morning if I was going to get bullied at school, but I don’t remember that. My mom says it’s good to forget stuff sometimes.

I used to draw myself as a girl. This summer, I went through my drawings from kindergarten and in all of them I had long ponytails and dresses on. It surprised me when I saw that. When I saw those drawings, it made me realize how fast people can forget things they did. I’m going into fifth grade now and that was just back in kindergarten.

People who are LGBTQ are important. That’s a fact. People who are different are very important because they are people, but not everybody sees them that way.

My mom and dad used to sometimes think I was transgender – a girl born in a boy’s body. They even thought about letting me transition to being a girl when I was littler. That doesn’t bother me because I know I’d be a boy now.

I don’t think it’s possible that I’m transgender because I really like how I am. I’m happy with myself.

My mom and dad tell me that some parents with kids who are four and five years old are really stressed out because they have gender creative kids and they don’t know what to do. I would tell those parents to just relax and let your kid be who they are. And, let them know that you love them no matter what. That’s what my parents tell me.

If I could talk to myself when I was four years old, I would tell myself “don’t transition, because you are going to like who you are when you’re older. You can like girl stuff without being a girl. You can just be you.”

Sometimes it’s hard being a transgender kid or gender creative kid because you’ve got to take a lot of time to figure things out.

I think overall parents need to do a lot of relaxing.

RaisingMyRainbow.com is a blog about the adventures in raising a fabulous, gender creative son.
View all posts by raisingmyrainbow →
This entry was posted in All Posts and tagged effeminate, Gender, gender creative, gender nonconforming, Gender Stereotypes, LGBTQ, transgender. Bookmark the permalink.

108 Responses to Inside the Mind of a Gender Creative Boy