Another Drag Queen Halloween for My Son

Posted on October 28, 2017 by raisingmyrainbow

I’m good at managing expectations and preparing my children for disappointment. That being the case, I have spent the last year telling C.J. that no Halloween ever in the history of Halloweens will compare to the one he had last year. He has experienced his best Halloween. The end. Period. Adieu.

Last year I told the internets and social meeds that he was going to be Bob The Drag Queen for Halloween and, voila, Bob The Drag Queen surprised C.J. by knocking on the door just before sunset on October 31 and trick-or-treating through the streets of West Hollywood while holding C.J.’s hand.

Whoever or whatever you dress up as for Halloween does not care enough about you to want to fly across the country and spend the holiday with you. If so, I would have spent some of my Halloweens with Tina Turner, Gumby and Rainbow Brite.

We have been very open and honest with C.J. Then, the season nine finale of RuPaul’s Drag Race concluded and C.J. turned to me and said “this year I’m going to be Sasha Velour for Halloween and she’ll come trick-or-treating with me. Even though Bob will always be my favorite queen.”

“I remember,” he said sadly. Oh, he remembered all right. He just didn’t want to believe it.

A few weeks ago he finally realized there was validity to what I had been saying all year. God bless the hopefulness of youth.

He announced that he was going to be a dead drag queen for Halloween.

“How did she die?” I asked not expecting an answer.

“Well. (click of the tongue and eye roll) Gurl. (flick of the wrist) She was headlining at a BIG drag show and one of the other drag queens didn’t show up for her shift. (disgusted eye roll) So she had to work overtime and do extra numbers. When she got done with her show it was so late that she was too tired to drive her car home. And she didn’t want to take a taxi or uber. So she decided to walk home. She was crossing the street when — BAM! — she got run over by a car!”

“So what I hear you saying is you’ve thought of a backstory,” I said.

After several attempts to find just the right dress he decided to wear one he got last Christmas. Then, he insisted that Matt run it over with our car.

His costume and backstory require that we get him completely done up and gorgeous in drag. And then make it look like he was run over. It’s a multi-step, multi-layer process. Because why wouldn’t it be? I mean, as much as I try to manage expectations and set the bar at a realistic height, it is C.J. we are talking about.

We did a dry run in preparation for Halloween. Here are some pics. Boo! 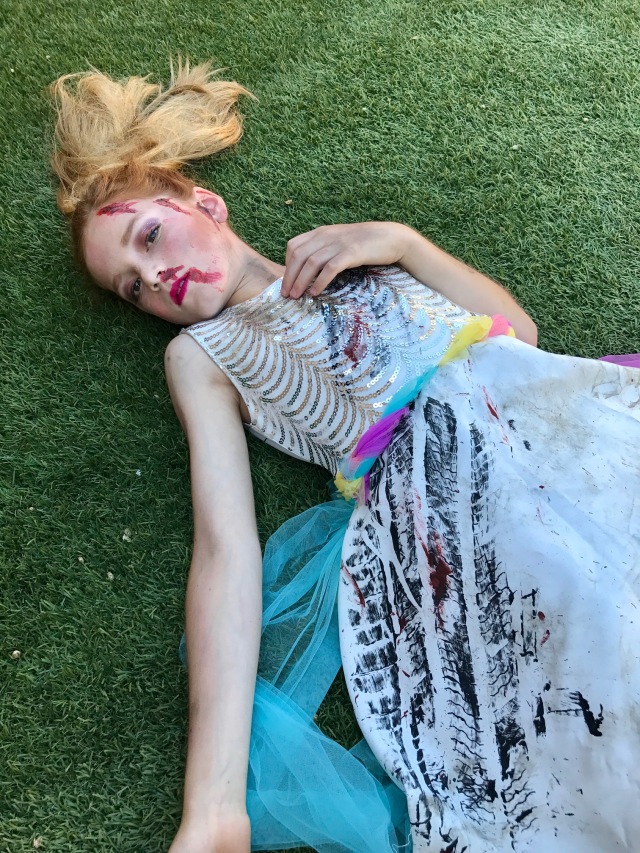 17 Responses to Another Drag Queen Halloween for My Son