Posted on August 22, 2011 by raisingmyrainbow

The Fraternal Birth Order Effect.  It sounds super serious.  Like a group out of The Da Vinci Code, a fraternity at Harvard or a secret club of the uber-rich and houtie toutie.  I feel like there are secret handshakes involved, aged scotch in snifters, dark wood paneling and signet rings.  Men in ascots for sure.

A reader tipped me off to the Fraternal Birth Order Effect some time ago, but the name seemed daunting and, frankly, I’ve been too tired for research and the new season of Project Runway is in full swing.

But, on Friday night, while my husband was at work, in the quietness of the house after the boys’ bedtime, I could hear Google calling.  I stayed awake until midnight (that’s 3 a.m. in Mom Time) reading everything that I could about the Fraternal Birth Order Effect.

The Fraternal Birth Order Effect is proven to mean that for each older brother that a physical male has his chances of being homosexual increase by approximately 33 percent.  According to several studies, the Fraternal Birth Order Effect is the strongest known predictor of sexual orientation.  The same is not true for females.  Have lots of older sisters?  It doesn’t increase your chances of being a lesbian.  Sorry, this predictor of sexual orientation is for boys only.

The Fraternal Birth Order Effect holds true for boys born from the same mother but not raised together.  It does not hold true for boys adopted into the same family.  Therefore, it has an “in-utero environmental causation.”  Which is a big fancy way to say it happens during pregnancy.

After my Google fit, I couldn’t stop thinking about all of the boys I know who have multiple older brothers.  I was counting little gay brothers to go to sleep.  I thought of those shirts they sell that say “I’m the Big Brother” and “I’m the Little Brother.”  The last-born son should have a shirt that reads “I Have the Highest Chance of Being the Gay Brother.”

I couldn’t stop thinking about families with lots of boys.  The Beckhams.  The Jonas Brothers.  The Kennedys.  The Marx Brothers.  The Duggars.  Oh no, not one of the 10 Duggar boys…

It is hypothesized (look at me using big words!) that the Fraternal Birth Order Effect has “something to do with changes induced in the mother’s body when gestating a boy that affects subsequent sons. ” (source: Wikipedia)

“The theory suggests that mothers during childbirth may develop antibodies to proteins made by their firstborn son’s Y chromosome, and subsequent pregnancies may stir up those antibodies in an immune reaction that affects the development of a male fetus.” (source: San Francisco Chronicle)

In the next decade or so, C.J. may need a shirt that reads “I Was the Last Son in My Mom’s Uterus and All I Got Was This Stupid Sexuality.”  C.J.’s Brother may very well have stolen the heterosexuality right out of my womb. 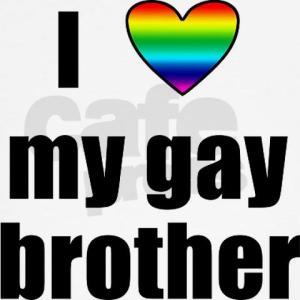 Maybe heterosexuality proved no match for the kick ass antibodies my body created in response to carrying my first son.  My antibodies should have capes and masks and patent leather, knee-high stiletto boots.

I was proud of my antibodies for a minute, thinking that they were superheroes.  Then, I thought, what if science learns to alter those antibodies so they decrease the likelihood of the Fraternal Birth Order Effect? Could women and doctors start messing with hormone injections during pregnancy to prevent homosexuality?

Maybe, one day, when I have the courage and energy, I’ll try giving that a Google.

Are you a gay male?  What is your birth order?  What does your sibling lineup look like?

Are you raising a gay male or gender nonconforming son?  What is their birth order?  What does their sibling lineup look like?

C.J. is gender nonconforming, the second of two sons.