Posted on March 20, 2013 by raisingmyrainbow

As I’ve written over the years, birthdays can be tricky when the birthday boy/girl is gender creative.  Take C.J.’s last birthday for example; he had a Valentine’s-Day-themed-crafty-dress-up-party, wore a pink tutu and tiara and had nothing but “girl stuff” on his wish list.

My annual struggle always shows up right on time.  Do I warn parents that my son will be presenting as a girl?  Do I inform gift givers that he doesn’t like “boy toys?”  You’d think I’d have the answers by now.  But, I don’t.

I’ve talked with enough moms of gender creative kids to know that these are issues that most of us have stressed over and try to handle as delicately and directly as possible.  I’ve often wondered what’s the best way to handle these birthday party dilemmas? 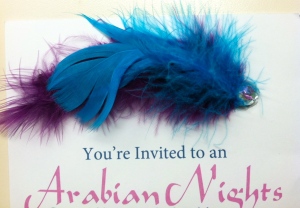 Then, C.J. received an invitation to his friend T.L.’s Arabian Nights themed eighth birthday party.  T.L. is gender nonconforming too.

When C.J. learned that he had mail, he hopped up and down trying to peek inside the mailbox.  When he learned that it was an invitation to a party, he ripped the envelope and yanked out the invite.  When he saw that the party invitation was decorated with colorful feathers and rhinestones he nearly lost his mind.  He squealed, held the invitation tight to his heart, closed his eyes and smiled as he ran in place.

When I finally pried the invite out of his hands to read for myself, it was my turn to be over-the-top happy.  All because of this disclaimer that T.L.’s Mom had included at the bottom.

A Quick Note to Our New Friends:

For those of you who have not yet had the pleasure to really get to know our fabulous T.L., he likes things that might traditionally be considered just for girls.  When shopping for a gift anything that you would normally get for an eight year old girl, T.L  will love!  Oh yeah, and if you’re not comfortable with an eight year old boy in a dress…you might want to sit this one out.  🙂

I immediately texted T.L.’s mom to RSVP and tell her what a fierce mama she is.  Later that night, when I showed the invite to C.J.’s Dad he made me text T.L.’s Mom again to let her know that he thinks that she’s pretty rockin’ awesome too.

In houses around town I pictured T.L.’s classmates getting the same invitation.  I pictured other parents reading the disclaimer and having a range of emotions.  I hope that some of them realized how brave T.L. and his Mom are.  It’s easy to see that they are fabulous.  Their bravery is less flashy but deserves the most credit.

RaisingMyRainbow.com is a blog about the adventures in raising a fabulous, gender creative son.
View all posts by raisingmyrainbow →
This entry was posted in All Posts and tagged Arabian Nights, Birthday, gender creative, gender nonconforming, Orange County, T.L.. Bookmark the permalink.

61 Responses to You Might Want To Sit This One Out…