Star Of The Week

Posted on October 29, 2013 by raisingmyrainbow

The first weeks of school are always a little rough for C.J. (and me).  There are a lot of new things.  New routines.  New classroom.  New teacher.  New classmates.

And, just like that, October arrives.  That’s when my son can no longer dull his sparkle.

Last year it happened on National Coming Out Day.  I shit you not.

“I did it,” he said as he was getting in the car after school.

“You did what?” I asked.  Not at all sure what the answer might be.

“I told my friends that I like girl stuff,” he said.

“What did they say?”

“They said that they already knew and then they ran to the slide to play.” 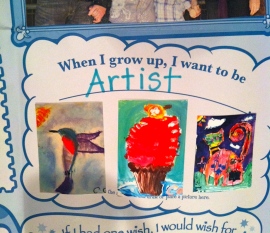 First Grade C.J. was relieved to be Star of the Week.  He wanted to use it as the chance to come out to his classmates as a boy who like girl stuff and boy stuff.  The last three words of his claim aren’t truthful.  C.J. does not like “boy stuff.”  None of it.  I struggle to think of something characteristically “masculine” that he does like.  I would have to offer up that he likes riding his bike (which is Monster High themed) and doing gymnastics (which isn’t typically perceived as the most masculine sport, but it’s the only sport that my son will do).  He also likes laughing at farts and making up rhymes and jokes that include the word “poop.”  Is that behavior considered more “masculine” leaning?

But, if it makes him feel better to tell the kids at school that he likes girl stuff and boy stuff, that’s absolutely fine with me.

Monday: Star Of The Week Day 1:  C.J. had to bring in an “All About Me” poster.  We spent the weekend getting his poster just right.  He has very high standards.

Favorite thing to do is: Play with my friends

If I had one wish, I would wish for:  I wish that people would understand me and not tease me because my style is different.  I wish that colors and toys and clothes could be for everyone – not “just for boys” and “just for girls.”  I like boys stuff and girl stuff. 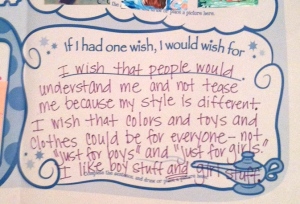 When he dictated his wish to me, I was a mix of sadness and pride.  I was sad that his biggest wish is to be able to like what he wants to like and be himself without the negative reactions and judgments of others.  And, I was proud that he was brave enough to share all of that with his 28 classmates so that he wouldn’t have to self-edit as much while at school.

“What did the kids say about your wish?” I asked after school.

“Some kids already knew.  Some kids didn’t say anything.  Some kids laughed at me.  But, those are the kids who laugh at everything,” he replied matter-of-factly.  He was unfazed by the laughers, so I was too.

Tuesday: Star Of The Week Day 2:  C.J. had to share one of his most prized possessions with the class.  He was going to share one of his favorite books, Roland Humphrey Is Wearing A What?, which is about a gender nonconforming boy who wears girl clothes to school and overcomes teasing.

Wednesday: Star Of The Week Day 3:  He led the class in some math-guessing game.

Thursday: Star Of The Week Day 4:  Every student in the class wrote him a letter and drew him a picture.

Friday: Star Of The Week Day 5:  He got to bring home the letters and pictures that his classmates made for him.  And, this is what I saw that warmed my heart and spread my smile.  These are just five of 28.

That’s C.J. as an artist when he grows up with one of his girl friends.

This is C.J. walking under a rainbow with one of his very best girl friends (and protectors). 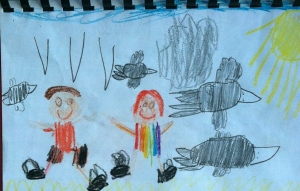 This is C.J. with one of the boys in his class. C.J. is the one in the rainbow shirt, in case you weren’t sure.

This is C.J. on an ice cream date with one of his girl friends.

This is C.J. holding up a rainbow for one of his girl friends. This girl wrote “I think you’re amazing” in her letter to him.

Since his turn as Star of the Week, C.J. has started to wear his socks from the “pink section” to school.  Now, every day he wears his rainbow BFF necklace that he shares with his friend Twirl.  And, he took his pink lunchbox with the hearts on it school for a week.  Then he broke the zipper.  So, now he takes one in the shape of a sweet owl that is intended for girls, but loved by my son…..the Star of the Week.

47 Responses to Star Of The Week