The Father Of My Children Has Changed

A year ago Matt was badly injured while he was on duty. He has been at home trying to heal and adjust ever since.

Being married to a police officer, I knew that this was a possibility, that he could leave for work one day and return with our lives changed – or not return at all. While his new physical limitations break my heart for him, I’m just thankful that he returned to me.

I’ve watched him go from brutal 60-hour work weeks to being home full-time (which also felt a little brutal at first. “He’s. Always. Here,” I remember texting a friend in those first days of more togetherness than I was used to).

I was warned to look for changes in him. Boredom, fear, anger, depression. You tell me to look out for something and I get a little bit hyper-vigilant.

I was looking so closely for the negative that it took me a while to see the positive.

Matt had morphed from a tough-guy cop to an amazing stay at home dad.

Since Chase was born 13 years ago, I had been the primary caregiver parent. I juggled (horribly) working part-time, writing, keeping the house in order (kind of, but not really) and caring for the kids. 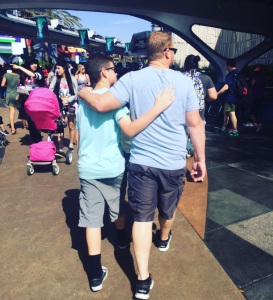 With Matt not working, I started working more. I figured I’d have to still handle the majority of the child-rearing and house-running duties because that’s how moms tend to think. That we have to do it all. That we don’t get help.

Because I’m the mom, when Matt instantly started taking on more around the house and with the kids I worried briefly that he wouldn’t “do it right” – and by “right” I meant the way I had always (half-assedly) done it.

Then I thought to myself “Screw it! Let’s see how this goes.”

That’s when I realized that Matt is the better stay at home parent. Hands down. Thumbs up. Without a doubt. With his weekly cleaning schedule as my witness.

Once I got out of the way for a minute, I could see how much he truly loves raising our kids and investing in their lives.

He’s more organized and tidier than I am. He can focus on tasks like doing the laundry; whereas I put a load in the washer and never return to put it in the dryer because I’ve moved on to starting and not finishing the dishes because I realized there was a junk drawer I needed to clean out. Then I get hungry and need a snack. And a nap.

He has discovered Pinterest and has boards for recipes and home projects. Not only does he pin ideas (like I used to), but he actually gives them a try, too. He rarely has a Pinterest fail.

He has the school drop off and pick up routine expertly timed and has a carpool text thread with a mom down the street and a stay at home dad across town.

I worried momentarily how Matt being the primary caregiver parent would affect C.J.’s gender identity and gender expression. Would C.J. feel like he had to be more masculine with a man around more than a woman?

Not at all. Matt has helped him build a fairy garden in the backyard, they watch RuPaul’s Drag Race together and, when I’m not around to have makeup done, C.J. does Matt’s makeup.

Matt takes Chase to the park to fly his drones, the driving range to practice his swing and helps him find videos on YouTube to teach himself to play the guitar.

There’s a new safety, comfort and predictability that the boys and I have enjoyed with Matt home this year. And, Matt enjoys it, too.

“I love staying home, it’s easy, I have it down,” Matt says with a proud, sincere smile — which pisses off some of my stay-at-home mom friends. I have to clarify to them that he means it’s easier than working the streets as a police officer.

Cheers to Matt, and all of the fathers out there who make fatherhood look easy – whether they work or not.

And, if Father’s Day is a hard day for you….I see you and tomorrow this day will be over.

RaisingMyRainbow.com is a blog about the adventures in raising a fabulous, gender creative son.
View all posts by raisingmyrainbow →
This entry was posted in All Posts and tagged Father's Day, fatherhood, gender creative, gender nonconforming, Gender Stereotypes, LGBTQ, Matt, Orange County, parenting, stay at home dad. Bookmark the permalink.

23 Responses to The Father Of My Children Has Changed