All The Details From Our Night With Bob The Drag Queen

Posted on November 1, 2016 by raisingmyrainbow

I kept a big secret for two weeks. It was stressful and exhausting. And, so, so worth it.

Shortly after I wrote about C.J. dressing up as Bob The Drag Queen for Halloween, Bob contacted me. I just about died. I couldn’t wait to tell C.J. that his hero wanted to talk to me. But, Bob told me not to tell C.J. because – wait for it – he wanted to try to surprise C.J. by showing up to trick or treat with him on Halloween night. The only thing Bob asked was that he get to see the look of surprise on C.J.’s face. We couldn’t tell C.J.

I’m a realist. What were the chances that Bob would actually fly into town for Halloween? Especially after a huge appearance and video launch that raged until 3 a.m. the morning of. In New York.

No way it would work out, but the offer was beyond sweet. I decided that when meeting C.J. in person fell through, I’d get up the nerve to ask Bob to send C.J. a video wishing him a happy Halloween. What’s the worst that could happen?

I’d never have to find out, because the worst didn’t happened. The best happened.

Bob worked until the early morning on Halloween, hopped on a flight from NYC to LAX and here’s what happened before and after the surprise of a lifetime.

Watching the season eight finale of RuPaul’s Drag Race to get Halloween ready.

1 p.m. = Our family left Orange County for Uncle Michael’s house in West Hollywood. C.J. loves West Hollywood and was very excited to spend Halloween with Uncle Michael and his friends. But, he was a little worried about the quality of trick or treating the neighborhood would offer given that he doesn’t often see kids in WeHo. Matt, Chase and I were all nervous about the surprise and C.J. was in the dark.

2 p.m. = We arrived at Uncle Michael’s in record time. As soon as we were up in Uncle Michael’s apartment, Uncle Michael and Matt said they had to run to the store for something, but really they were meeting with a producer and cameraman from ABC’s Nightline who were there to capture the surprise.

3 p.m. = While Uncle Michael did C.J.’s makeup while I snuck downstairs to be interviewed by Nightline. View their coverage here.

4:20 p.m. = I got a text that Bob had arrived and was walking up the apartment. I was a nervous wreck. C.J. had no idea that he was about to meet his hero. How would he react?

4:30 p.m. = Bob knocked on the door and C.J. answered. C.J. stared and stared and stared. I was afraid he might pass out and fall over backward. Instead he ran to give Bob a hug. Then he started crying happy tears.

“That’s the first time I ever cried because I was happy,” he said later.

Bob and C.J. exchanged gifts. Bob gave C.J. two t-shirts, a coin purse and a custom made Bob The Drag Queen Doll. They are C.J.’s most prized possessions. 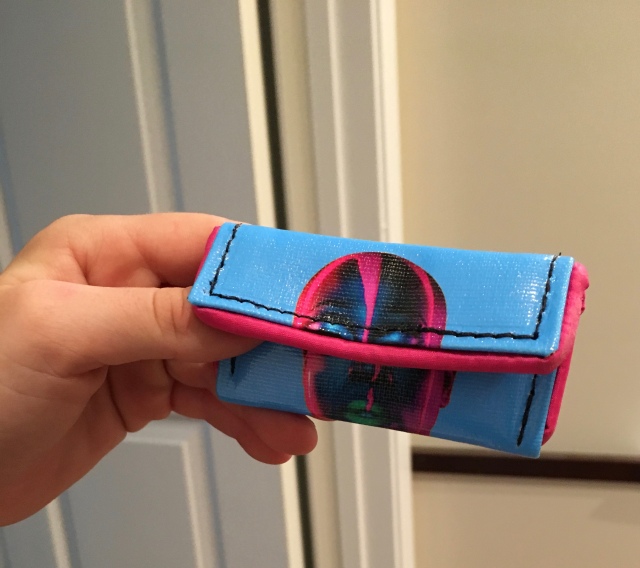 C.J. gave Bob a painting he made that morning and a letter. C.J. thought that we were going to mail the painting and letter to Bob this week, as soon as I found his address (wink, wink). 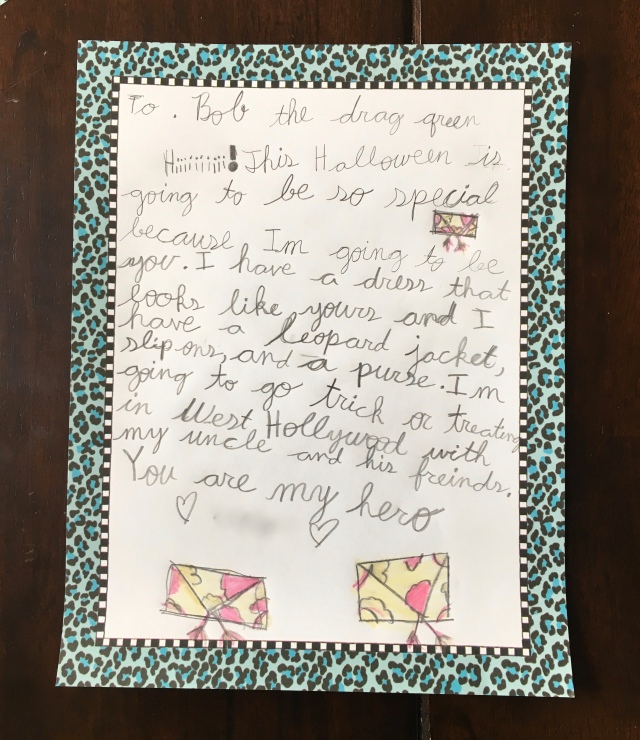 5 p.m. = C.J. and Bob sat down for some lemonade and pizza. They started gabbing and C.J. got comfortable and attempted to make Bob his new best friend.

5:30 p.m. = Bob touched up C.J.’s makeup and fixed his wig, teaching C.J. every step of the way. C.J. was a quiet and attentive student. He had lots of questions about fake eyelashes and made several attempts to touch Bob’s without Bob noticing. 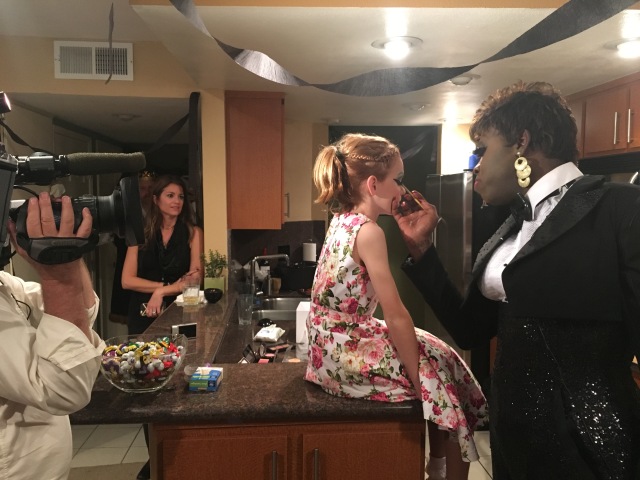 “If there’s a gay heaven, Bob’s going there for sure,” Uncle Michael said. We all agreed.

5:45 p.m. = We headed downstairs to go trick or treating and stopped in the lobby for pictures.

“Shit! My nail broke!” C.J. exclaimed when one of his tiny press-on nails popped off. We all laughed. He’s not usually allowed to say “shit” but I let it slide because it was Halloween and he was with his hero. And, because it made Bob laugh.

“Of course you can, gurl,” Bob said reaching for C.J.’s hand.

6 p.m. = We followed Bob and C.J. as they trick or treated. Bob hadn’t trick or treated in years, but I guess it’s like riding a bike because he knew exactly what to do. The two of them held hands and giggled from door to door. They shared trick or treat bag and purse holding duties.

“Oh, you look great,” one old lady told Bob, thinking he was in a Halloween costume.

“Thanks! We are each other!” Bob said.

At one point, one lady was so nice to them that she invited them in to her house for more candy. I had to kick into mom mode and remind Bob and C.J. that for safety purposes we don’t go in to strangers houses, especially on Halloween.

Bob let C.J. have all the candy they collected, which C.J. thought was really cool. (Except the taffy. Bob loves taffy.)

“Can we have a playdate sometime?” C.J. asked Bob.

Matt walked Bob to the Uber and told him again how much it meant to us that he rearranged his schedule to make it the most memorable Halloween our son will ever have.

We walked around the West Hollywood Carnaval for an hour and then drove home.

“If Bob’s going to gay heaven, I want to go there, too,” C.J. said when I kissed him goodnight.

Both boys were late to school this morning.

“I’m just going to tell the office and my teacher that I’m sorry I’m late but I have a fun-hangover from being in West Hollywood all night with drag queens,” C.J. said as we pulled into the parking lot. He still had eyeliner and mascara smudged around his eyes.

When he got home from school he asked me to tell him again how everybody kept it a secret that Bob would surprise him for Halloween. He likes to hear about it over and over again. How Bob read about him, worked all night, flew to LA all the way from NYC and surprised him.

It’s the stuff dreams are made of, except it’s not a dream. It’s real life, and it happened to my son. I will never be able to thank Bob enough.

RaisingMyRainbow.com is a blog about the adventures in raising a fabulous, gender creative son.
View all posts by raisingmyrainbow →
This entry was posted in All Posts and tagged Bob the Drag Queen, gender creative, gender nonconforming, Gender Stereotypes, Halloween, LGBTQ, Orange County, parenting. Bookmark the permalink.