Posted on May 9, 2017 by raisingmyrainbow

I’m late posting April’s Month In Review because we were busy celebrating Chase’s 14th birthday. Can you believe he’s already 14?! Any-who, following are the highlights from our month on Instagram. Click here to view more. If you’re on Instagram, follow me. If you already follow me, thank you!

I’m beyond honored to again be named one of BlogHer’s Voices of the Year. BlogHer is the largest annual celebration of women online content creators, social media influencers and media makers.

I’ve been named a BlogHer 2017 Voice of the Year in the Short Written Work category for the blog post I published the day after the Pulse nightclub shooting in Orlando.

Growing up, I instinctively knew that I had to worry about my brother’s safety because he was slightly effeminate when young, people assumed he was gay as a teen, then he came out shortly after high school. All of those things made him a target for bullying, harassment, victimization and violence.

I saw him find his people and it eased my worry. The first time he took me to a gay club, I remember thinking, “He’s found his people. He’s safe here.”

When I awoke to news of the shooting in Orlando, I was reminded that my brother is not safe. My son is not safe. Even if they find their people. Because monsters can find them there, too.

About a year ago, I dropped CJ off at a girlfriend’s birthday party. An art teacher helped the girls and CJ through a painting class and, then, they enjoyed cupcakes and gift opening. When I returned to pick up CJ, everyone’s paintings were lined up for viewing and admiration. Everyone had followed the teacher’s step-by-step instructions and pained two pink French poodles on either side of the Eiffel Tower. Everyone except CJ. He painted this. Because he can never be the same as everyone else. This painting has been hanging in his bedroom ever since. #nobodyisperfect

My son or a resident of Grey Gardens?

We took some time off to get away for Spring Break and are just now getting back to our normal routine. Which sucks, but what are you going to do? It can’t be Spring Break forever.

CJ used his time on the plane to finish the book Courage to Soar by Simone Biles. He was so inspired that he made me spend the rest of the flight taking pictures of his Barbie doing plane gymnastics. Which means I didn’t get to finish my book. But that’s okay because mothering is all about sacrifices. 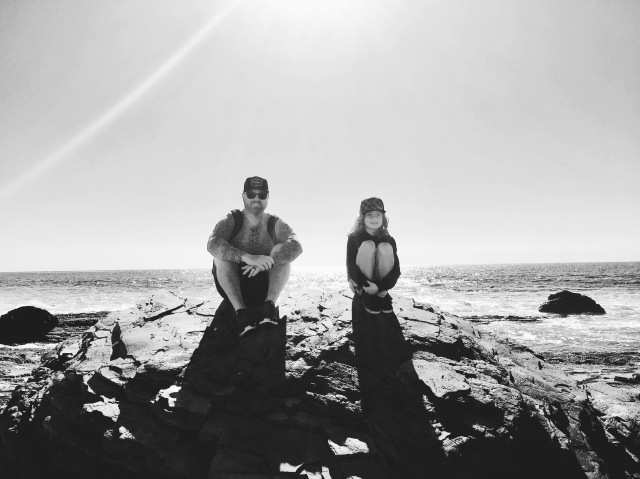 When I tell other guys and dads that my son is gender nonconforming and possibly transgender and/or gay, the response I get most often is “Man, how do you deal with that? I couldn’t do it.”

What does that mean? You couldn’t parent a kid like mine? You’d be his first bully and “make him a man?” To me, that makes you less of a man. Much of the time when I confront such people they immediately begin to backpedal and try to move on. I’m not afraid of this discussion and many don’t choose to argue with me or defend their position.

To me, loving a child who is different, a target and seen as vulnerable is my role as a father and decent human being. He’s just as special to me and loved by me as my oldest son, whose most prized possession is a pocketknife, who plays football, likes fart jokes, and is starting to notice girls.

I want to love my son, not change him. I’m a father. I signed on for the job with no strings attached, no caveats, no conditions. – Matt, in a piece he wrote for The Atlantic a while back.

RaisingMyRainbow.com is a blog about the adventures in raising a fabulous, gender creative son.
View all posts by raisingmyrainbow →
This entry was posted in All Posts and tagged BlogHer, gender creative, gender nonconforming, Instagram, LGBTQ, Orange County, parenting. Bookmark the permalink.