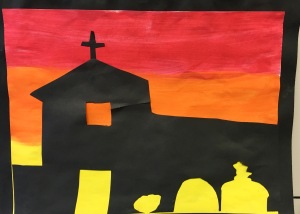 C.J.’s school year ended on Friday. Days prior to that was his class’s Open House – a night near the end of the school year when families are invited into the classroom to ooh and aah over the students’ best work. Of course Matt and I attended. We are really good at oohing and aahing.

On the side wall there were individual pictures of each student looking like they were panning for gold. I took a picture of prospector C.J. and walked to the back of the room, where the biggest writing project of the year was on display.

The students had to write an essay as if they were 1840s emigrants traveling by covered wagon across the western half of the United States from Missouri to California.

The students had to take the assignment seriously. They had to carefully consider who they would want in their wagon, the supplies they would bring and the challenges the journey might hold.

I read snippets of other students’ essays as I searched for C.J.’s. Many of them had their wagons loaded with family, friends and pets.

I couldn’t wait to read who C.J. picked to travel and start a new life with in California. I bet it would be Matt, Chase and I. His family. Of course.

There it was! I found C.J.’s essay and started reading.

“C.J., Bob The Drag Queen, RuPaul and many more travelers were on their way to California from Kansas City, Missouri,” started the opening paragraph. “It was winter. They were going to California because they wanted to get wealthy and have better jobs and a better place to live.”

Another mom bumped in to me as she read her child’s essay hanging next to C.J.’s. I glanced at her child’s story and then stopped when I realized that might prompt her to read C.J.’s drag-queens-on-a-road-trip-a-la-To-Wong-Foo essay.

When given the freedom to pick whoever he wanted to start a new and better life with, my son didn’t choose family; he chose the most famous drag queens in the world. He left me in Missouri and struck out for California. I wanted to be in covered wagon. I’m fun. I like drag queens.

After reading and photographing his essay, Matt and I made our way to the door and stopped to talk to C.J.’s teacher.

“So, tell me, in all your years of teaching, have you ever had a student load their covered wagon with drag queens?” I asked her.

She started laughing and shaking her head.

“When I first started reading his story, it took me a minute to realize who all of those people were,” she said, still laughing. “Of course that’s who he chose! Only C.J.!”

I told C.J. that I loved his essay and he explained that his initial concept had included more wigs, makeup, costumes and hijinks. And Jinkx Monsoon.

He said he toned it down after a few reminders that the story was supposed to be historical fiction, not fantasy. I’m not sure why that meant that Jinkx got eliminated and the other two queens got to stay. Maybe I was in the wagon in the first drafts, too. Maybe I got edited out. Maybe I stayed in Missouri with Jinkx. Maybe I’ll visit C.J., Bob The Drag Queen and RuPaul in California one day once they get settled, wealthy, have better jobs and a better place to live.

C.J., Bob The Drag Queen, RuPaul and many more travelers were on their way to California from Kansas City, Missouri. It was winter. They were going to California because they wanted to get wealthy and have better jobs and a better place to live.

“Come on!,” yelled Joe, a man who was also traveling to California. “Ya’ll got to get these wagons over the river before nightfall!”

Once all the wheels were off the wagons, they all got the wagons on the river. Within minutes, something happened that they were not prepared for.

Joe dove in to the water and swam as fast as a dolphin. It was no use. All their barrels of water and boxes of cornbread were gone. C.J. looked around and heard sobs as loud as a stampede of buffalo from all the travelers.

“Come on! We have to keep going,” yelled RuPaul. “We need to get to California!”

“I don’t know, but we need to get out of here and to California as fast as cheetahs!” said RuPaul.

The next day was full of hunger, fear and a bunch of mixed emotions. As all the wagons traveled in the heat that felt like lava. The sun blistered the travelers backs. Skin was peeling off of their backs. It was almost too much to handle.

Just as the travelers thought that they couldn’t go any farther, out of the corner of his eye, C.J. spotted a group of Indians. C.J. jumped up and stood up as tall as he could in his high heels to show that he wasn’t afraid.

Once the Indians saw how starving, tired, scared and weak the travelers were, the Indians played games with the kids, gave them a place to sleep, gave them food and water and told them the fastest trail to California.

RuPaul, Bob The Drag Queen and C.J. got to California three days later. They got more food and a nice house and became very wealthy.

RaisingMyRainbow.com is a blog about the adventures in raising a fabulous, gender creative son.
View all posts by raisingmyrainbow →
This entry was posted in All Posts and tagged Bob the Drag Queen, gender creative, gender nonconforming, Jinkx Monsoon, LGBTQ, Orange County, parenting, RuPaul, RuPaul's Drag Race. Bookmark the permalink.