Take Me Out To The Ballgame

Posted on February 28, 2011 by raisingmyrainbow

But, Uncle Uncle struck out at t-ball.  And, C.J. is more like Uncle Uncle than anybody else in our family.

As the 80’s approached, Nana Grab Bags would sit in the stands every weekend with her Farrah Fawcett hair, Gloria Vanderbilt jeans and cry behind her enormous sunglasses as her baby boy struck out at t-ball while every other player easily managed to hit the stationary ball off of the stationary tee adjusted perfectly within their strike zone.

Uncle Uncle didn’t seem to mind.  He loved to pick daisies in the outfield and tap dance for the bees.  He was completely oblivious to the game being played.  When the innings dragged on he kept himself busy by reenacting both fantastic acts of Annie and singing all of the songs from memory.  Flourishes were added here and there for dramatic effect.

Every once in a while he would grab himself and hop around yelling — so loud that spectators at neighboring fields could hear him –“Mom-meeeeee, I have to go peeeee-peeeee.”

Nana would wipe her tears with great dignity and lovingly escort him to the bathroom.

C.J. has been watching his big brother play t-ball and, now, baseball for most of his life.  He loves to be down at the fields, play with the other siblings and get Icees from the snack bar.

“When I gonna’ play baseball?,” he asked a few weeks ago.

His request was perfectly timed, as the local recreation department was just about to start a t-ball league for three and four year olds and the uniform stores near by were all having a clearance sale

“I love my baseball costume,” C.J. said as he twirled in front of the mirror in his team t-shirt, workout pants and baseball hat.  “It’s called a uniform,” I said as I smiled.

At the field they assembled the kids.  C.J.’s hat fell off.  He put it back on and looked at me.

“Does my hat still look otay, Mama?,” he shouted across the field.

The other moms looked at me. 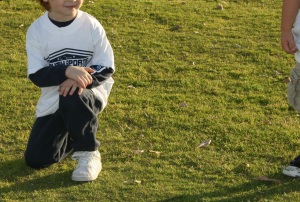 “Spread your legs, get down and get ‘baseball ready’,” his coach instructed.

Apparently C.J.’s legs don’t spread.  His knees were stuck together.  With them together, he bent over with his little rump sticking out.  His knees, together, went from one side, to the other, to totally in the way as he tried to lower his hand-me-down glove to the ground.  A grounder rolled passed him.

“Oh, dear!” he breathed as he ran after the ball.

C.J. gets my congratulations and praise for sticking with it, but at the end of the six week season he decided that he didn’t want to sign up for t-ball again.  That’s fine, we’ll give it a go again later.

Next week he starts gymnastics.

11 Responses to Take Me Out To The Ballgame