Posted on October 16, 2016 by raisingmyrainbow

Halloween is a night for boys to dress up as their heroes: firefighters, police officers, military personnel, baseball players and superheroes. My nine-year-old son C.J. is no different from most boys. He’ll dress up as his hero for Halloween. His hero is Bob The Drag Queen.

Bob The Drag Queen is the winner of the most recent season of RuPaul’s Drag Race. Bob, RuPaul and all the queens are brave, strong heroes for my rainbow son. They’ve taught him to celebrate his uniqueness, cultivate his own style and let criticisms roll off his back. They’ve taught him the importance and power of loving himself. They’ve also taught him a few words and phrases that I’ve told him he can’t use until he’s 18.

C.J. has watched Bob The Drag Queen’s “Purse First” music video more times than I can count (his second favorite video to watch is Alaska’s “Your Makeup Is Terrible”). So, naturally, he wanted to emulate Bob’s “Purse First” video look for Halloween. 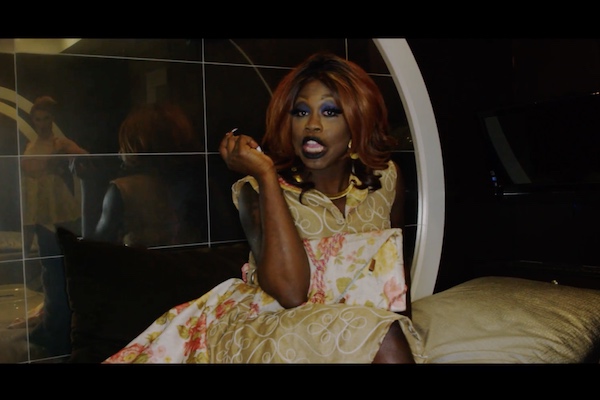 The inspiring look. Bob The Drag Queen in “Purse First.” (Screenshot via YouTube.)

“Just so you know, we aren’t going to make your skin or face brown like Bob The Drag Queen’s,” I established right up front. Bob is black and C.J. is half Irish with skin the color of fat free milk and red hair. While I’m totally fine with my son going in drag, I’m completely opposed to him going in blackface. To some people, that makes me weird.

“Why would you think I’d do that?” C.J. asked in surprised disgust. Which made me proud of him and disappointed in myself for bringing it up. “I need her dress and purse and hair and makeup and everything.”

Now, let’s be clear. I’m not a seamstress, nor a makeup artist. I’ve never styled a wig, nor made a purse. I am a mom from the suburbs whose real talents are propagating succulents and whipping up dinner using random ingredients from the pantry because I’m too lazy to go to the store.

Knowing my limitations, C.J. told me to call his Uncle Michael for help.

I did as I was told because I knew it was the right thing to do.

Uncle Michael helped C.J. shop for supplies and make a purse to match the dress they had me order from Amazon. Then, Uncle Michael set up a classroom in our dining room and taught us how to style the wig and do the makeup, because he won’t be in town to help on Halloween. I hope that when the big night finally gets here, my newly learned drag queen skills don’t fail me.

(The one item left on my Halloween to-do list is to buy a petticoat for my son – which is something I never thought I’d say.)

C.J. has since perfected his 2016 trick-or-treating technique. He will approach a house. Ring the doorbell and stand to the side. When a person opens the door, he will come into view purse first.

I don’t have the heart to tell him that people in our conservative Orange County neighborhood probably won’t get his shtick.

“What are you going to be for Halloween?” people and peers have been asking C.J. for weeks.

“Why aren’t you telling people what you’re going to be for Halloween?” I asked him in private, worried that he wasn’t telling people because he was afraid of being teased.

“I’m not telling people that I’m going to be Bob The Drag Queen for Halloween because I don’t want them to steal my awesome idea,” he replied with the attitude needed to be the world’s best drag queen for a night.