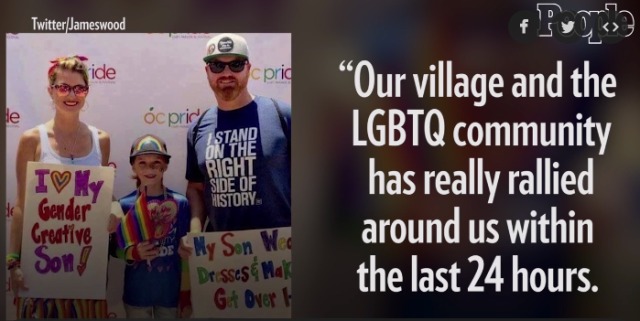 In recent years, James Woods has traded in tackling prime roles in critically-acclaimed films to gleefully play the part of a smugly menacing public nuisance on social media.

He’s been called “President Obama’s biggest, most famous troll on Twitter,” and now, he’s terrorizing the family of a gender nonconforming child. — HuffPost

That gender nonconforming child is our son. We are that family.

Rather than retreating and/or ignoring the barrage of hate that followed Wood’s tweet, Matt and I chose to speak to HuffPost about what we’ve experienced over the past several days. Click here for the interview.

If you choose not to click through or read the entire interview, at least read the following excerpt about the support we’ve received — because it’s been amazing. People Magazine also did a short interview, click here to read it.

What kind of support have you received?
Matt: We have received a lot of support from our friends and family. Anybody who knows us knows that we have an awesome support system. It goes to show that you don’t cultivate relationships with quality people for the good times. You do it for the hard times. That’s when true friends step up, support and encourage you. They remind you that you’re doing the right things for your children. I expected my friends and family to be there for us, I wasn’t expecting the outpouring of encouragement and love from the public and celebrities.

Lori: This incident has shown us that the village we are lucky enough to be a part of will assemble at a moment’s notice to support and protect us. We’ve had close friends and mere acquaintances reach out to us and defend us. They offered to help us in any way they can and have made good on their offers. The LGBTQ community was also swift to be by our side. We’ve been in constant communication with the Human Rights Campaign (HRC) since the tweet. I’ve seen firsthand how quickly and powerfully HRC can mobilize to provide support, a listening ear and sound advice. It’s amazing. PFLAG has also been checking on us throughout the day and offering help. Members of the LGBTQ community who are strangers to us have offered support and encouragement.

And all of the people and organizations that have contacted us have always been – first and foremost ― concerned for our safety and wellbeing. And, then, there are the celebrities who came to our defense. When Neil Patrick Harris replied to Woods’ tweet, I was speechless. As a parent, when someone comes to your child’s defense, the positive emotion is overwhelming. With Neil being who he is and having the audience he does, that positive emotion was multiplied. We are so thankful for his tweet and support. When other celebrities started retweeting Neil’s tweet, it felt like this big, powerful, loving, supportive army had assembled in front of us and we could take a moment to catch our breath.