Survey Says: We Need to Educate Educators About Rights of LGBTQ Students

Posted on March 11, 2017 by raisingmyrainbow

During the last two weeks, I’ve read and heard a lot of misinformation about the rescission of federal guidance previously given to schools regarding the use of restrooms and single sex spaces by transgender students.

I am the mother of a gender nonconforming child who has been bullied at school — with the most severe case occurring in the bathroom. I’m also a person who thinks everyone should be treated equally and with kindness and empathy. So, understandably, the confusion surrounding the rescission causes me great concern, especially when it is evident in educators and administrators – the people who spend the most waking hours with transgender and gender nonconforming students.

Title IX is still in effect and it protects students from bullying, harassment and victimization based on presumed or confirmed sexuality, gender identity and gender expression.

Over the summer, I surveyed educators and administrators about the federal (Title IX) and state laws in place to protect students based on their presumed and/or confirmed sexual orientation, gender identity and gender expression. 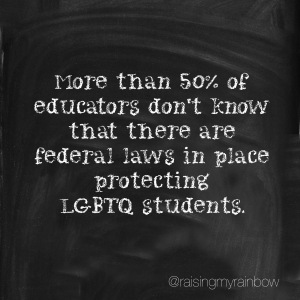 More than 500 credentialed educators and administrators from 43 states participated in the survey. Of participants, 41 percent work at the elementary schools, 25 percent at middle schools and 34 percent at high schools. I asked for participation from people with all types of feelings about the LGBTQ community.

The results of the survey are troublesome because they show just how little (if anything) educators know about Title IX and state laws that protect students who are perceived or confirmed to be LGBTQ.

More than 50 percent of educators don’t know that there are federal laws (Title IX) in place that protect students from bullying, harassment and victimization based on confirmed or presumed sexual orientation, gender identity and gender expression.

If educators don’t know the federal and state laws, they can’t enforce them or spot a violation. LGBTQ students in their charge aren’t being protected and cared for as legally required and educators could be acting illegally and culpably.

What types of information are schools/districts providing educators with regarding Title IX and state laws? Not much.

According to 61 percent of educators, schools/districts provide no information about LGBTQ laws.

“Literally nothing. I work in the largest county/public school system in the state of North Carolina and although our state is in the midst of horrific actions by our governor, who put HB2 into law (which requires all people to use the bathroom that corresponds to the sex on their birth certificate and not their gender), there has been no communication from the top down on this subject. Many teachers are not even aware that HB2 has anything to do with us as educators.”     — Elementary School Educator, North Carolina

“None. I heard about a bathroom controversy with one of our students through the news and not from my own administration.”     — High School Educator, North Carolina

“Little to none; bullying of any type is not a priority for administrators.”     — High School Educator, Louisiana

“None. The district I work for is a hotbed for anyone who is not a True Christian. Our principal has sent out emails saying that Catholics, Jews, Muslims should not be allowed to teach. Secular or LGBTQ people don’t exist in his world.”     — Elementary School Educator, Texas

Eleven percent of educators report that their school/district treats the negative and unlawful treatment of LGBTQ students as general bullying – even though the laws are different and the effects can be more severe.

“We get the ‘normal’ don’t bully/harass training each year that most adults sort of ignore as part of the going through the motions of starting a school year.”     — High School Educator, Missouri

“We received a book. We are just handed it and basically told to read it if we want. NO additional education or discussion.”     — Elementary School Educator, California

“We got a big pamphlet about several issues around transgender issues; I’m guessing there’s more but I honestly didn’t go through the whole thing.”     — Middle School Educator, California

Two percent of educators learn about the rights of LGBTQ students from the students themselves (not their school/district).

“There is a Safe Zone training program created by members of student life. However, nothing that I can recall has come from administration regarding anti-bullying laws.”     — High School Educator, North Carolina

If districts aren’t educating their educators about Title IX and state laws, should it be the responsibility of degree and/or teacher credentialing programs?  That would be a good place to start, but 88 percent of educators learned nothing about the laws while in college. Only five percent of educators have taken a college-level course on discrimination in the classroom and equity on campus. The course was not LGBTQ-specific, but covered all types of discrimination including: disability, learning differences, national origin, race, color, religion, sex, gender and sexuality.

“During the section on ‘special students’ (where we covered a whole bunch of different topics, like homeless students, students with mental illnesses, students with minor disabilities that don’t require special ed.) We talked for about three hours about LGBTQ students, and student who have LGBTQ parents. It was pretty cringe-worthy, and it was obvious the teacher didn’t really have any clue what they were talking about.”     — Elementary School Educator, Montana

I know that day in and day out educators are being told the myriad ways they are failing their students. I’m not here to do that. I acknowledge that educators, in general, want to help; after all, most got into education because they have a soft spot for children. Schools/districts, credentialing programs and professional development programs are failing educators by not teaching them about the special needs of LGBTQ students, the risks they face, the laws that protect them and the consequences of not following the laws.

How do we make it easy for educators to learn these lessons if their employer and credentialing programs aren’t teaching them? Is it reasonable to expect educators to seek out the information and learn on their own?

I don’t have the answers to those questions, but I do know that until we find and implement the answers, school will feel unsafe for LGBTQ students. Some kids will pee their pants (like my son did) because bullies live in the bathroom; some will drop out of because their future doesn’t seem as important as their present; and some will end their life because they have no hope that things will get better.

If you are an educator, please learn more about Title IX and state laws that protect students from bullying, harassment and victimization based on presumed or confirmed sexuality, gender identity and gender expression. Following are some helpful links:

5 Responses to Survey Says: We Need to Educate Educators About Rights of LGBTQ Students